WHAT IS THE WORK OF AN ENGINEERS ? 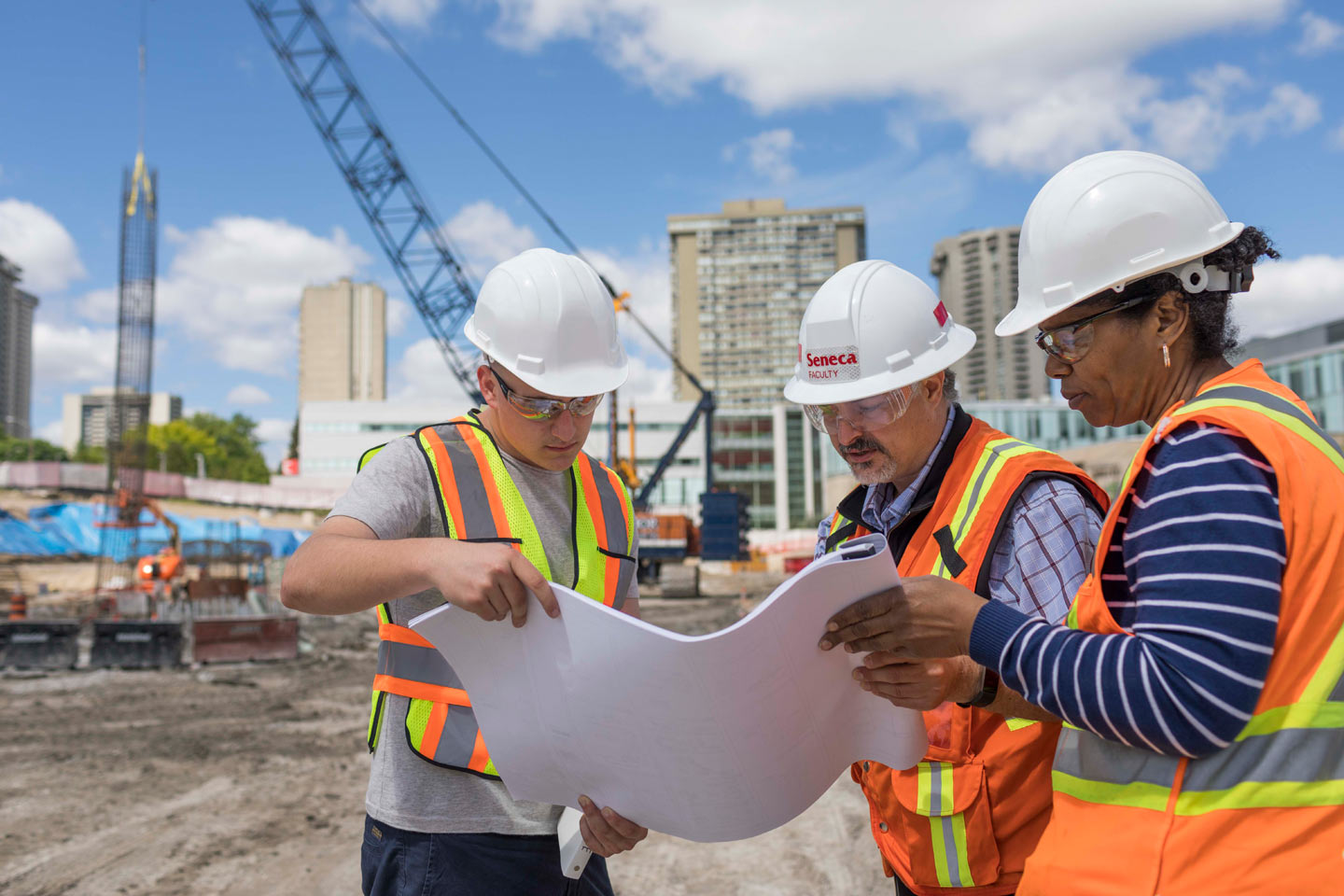 Engineers design, build, and maintain various complex systems and structures, from buildings to software. While there are many engineering professions, there is one consistent engineering mindset: to innovate. To do so, they must think in increasingly cross-disciplinary ways, finding combinations, patterns, and intersections between previously disparate conceptual realms.

Engineers are the architects of the world. While stereotypes paint a picture of engineering as an anti-social hard science that’s primarily conducted behind a computer, engineers are in fact the scientists and artists who created the Palm Islands in Dubai and the Millau Viaduct in France. An engineer’s creativity does not always need to be so grandiose—nano-engineers work down to a billionth of a meter in scale.

Those interested in engineering as a career can look forward to job security, lucrative salaries, and career satisfaction in designing structures, systems, and products to make life easier for humans and healthier for the planet.

Read on to learn more about fifteen engineering fields and their professional societies.

Aerospace engineers are at the forefront of the future. Aerospace engineers design and model aircraft, spacecraft, satellites, and missiles to do what engineers do best: chart the unknown and put it to work with rigorous scientific modeling. They are changing the landscape of what is possible, whether that means putting a human on the moon, connecting different parts of the world with satellite communication and air travel, or exploring the far reaches of the solar system.

Automotive engineers design, test, and build land vehicles that operate in a wide variety of environments, which in turn requires an extraordinarily complex and multi-disciplinary approach. Fuel systems, thermodynamics, computer science, and industrial logistics all intersect in automotive engineering to build smarter, more efficient, and safer land transportation systems that, to the end-user, feel effortless. What’s more, with the advent of autonomous vehicles, automotive engineers today benefit from an in-depth understanding of cybersecurity.

The International Federation of Automotive Engineering Societies (FISITA) says that automotive engineering work can be divided into three areas: design, research and development, and production. Notably, automotive engineers are tasked with designing the interior and exterior of new cars, testing vehicle prototypes for safety, and ensuring the consumer preferences are adhered to as well as meeting environmental and safety standards for future vehicles.

Biomedical engineers apply an engineering skillset to the biological sphere. They design technology that interacts with the living body, whether this is designing and developing advanced prosthetics, artificial internal organs, complex diagnostic devices, or new drug treatments, biomedical engineers explore, enhance, and extend life beyond its original limits.

While the BLS shows that most biomedical engineers work in research and development or quality assurance, the multidisciplinary nature of this type of engineering provides specialization in areas such as biomaterials (naturally-derived or laboratory-created materials), clinical engineering (medical technology for healthcare delivery), and rehabilitation engineering (development of devices that help people recover from or adapt to physical or cognitive injuries) among others.

So how do these skills show up in consumer markets? The BLS shows many chemical engineers are involved in the production of electronic, food, clothing, and paper products. Chemical engineers involved with oxidation (using oxygen to make chemicals) or polymerization (making plastics and resins) are known as process engineers. Other areas of specialization include nanomaterials, the creation of very small substances, and biological engineering.

Civil engineers design, build, and maintain the physical infrastructure that connects our society. Roads, dams, buildings, airports, bridges, tunnels, water and waste systems—civil engineers build and connect a jigsaw puzzle of moving parts so that they can come together in safe, efficient, and productive ways. Nested underneath civil engineering are three further specializations:

To ensure that renewable energy projects are permitted and implemented effectively, the BLS states that civil engineers prepare permits for solar and wind turbine construction. This includes evaluating the land for increased construction traffic, as well as wind speed and seismic activity.

Computer engineers design and develop the technical components of computers, such as microprocessors, sensors, circuit boards, memory devices, networks, and routers. As computer engineering continues to grow as a field, four sub-specializations have developed within it:

Electrical engineers design and develop all forms of electrical equipment, such as radar systems, GPS, and electric motors, as well as new forms of power generation and transfer. They work in tandem with federal or private entities to streamline today’s systems and build tomorrow’s.

Electrical and computer engineering (ECE) is an emerging subspecialty that explores the interaction of machines with computers, with applications in robotics, autonomous vehicles, power systems, lasers, medical equipment, and electromagnetics. The BLS shows that electrical engineers who work for the federal government are often tasked with researching and developing electronic devices for telecommunications, aviation, and radar and sonar systems.

Another subspecialty, nanoengineering, focuses on applications in computer science and biomedical engineering that operate at one billionth of a meter—another impossibility made possible by the engineering mindset.

Because of their innate knowledge of the overall vision of product or project development and design, the BLS shows that architectural and engineering managers (which are combined in the same occupational category) spend the majority of their time coordinating and overseeing production teams. While engineering managers work across several industries, the top employers in 2019 were manufacturing and architectural, engineering, and related services (BLS 2020).

Industrial engineers design and maintain industrial and manufacturing processes. This can include the interconnected and optimized storage and distribution of various resources such as time, labor, machines, materials, information, and energy, which increasingly travel across geopolitical borders. Whether streamlining supply chain logistics, developing job evaluation tools, or calibrating manufacturing processes, industrial engineers interact with computer networks, robotics, and organizational structures in the pursuit of efficient, safe, and rapid productivity.

Materials engineers work at the atomic level—developing, processing, and testing raw materials such as ceramics, plastics, composites, and metals. Materials engineers can mold these elements to certain technical specifications, or apply an innovative approach and discover or design or reproduce new materials that, like aluminum, one day become the essential building blocks of the future.

Nuclear engineers harness, study, and manage the power of the atom, primarily through nuclear power and radiation. Not limited to developing reactor cores, radiation shields, and power plant instrumentation, nuclear engineering also applies to medical diagnosis and treatment. Acutely trained in the tremendous power and complexity of an invisible-to-the-eye world, nuclear engineers find ways to prevent or correct nuclear power plant emergencies, to safely dispose of nuclear waste, and to locate and irradiate a tumor in a human body.

Most nuclear engineers work in research and development firms or for the federal government in the case of nuclear power plants (BLS 2020). Often working in tandem with mechanical and electrical engineers, nuclear engineers bring their knowledge of energy and radiation to the table when designing tools for energy infrastructure or healthcare facilities.

Robotics engineers create robotic devices and the applications that run them. While manufacturing is still the primary employer in this area, robotics has moved out of the factory floor and into various industries, such as agriculture, aerospace, automotive, biomechanical, and power systems management—with new applications in new arenas being tested every day. Robotics engineers must not only learn to collaborate with many different fields of research but also learn to anticipate and envision how robotics may play a role in society.

Due to the controversial nature of robotics technology, members of the Association for the Advancement of Artificial Intelligence (AAAI), a professional society for robotics engineers, holds its members to a code of ethics and professional conduct. The code is intended for: “anyone who uses AI technology in an impactful way and is particularly intended to act as a standard of ethical and professional conduct for all AAAI members”, providing protection for the organization’s members and the people their designs serve.

Safety engineering prevents accidents and reduces opportunities for human error in engineered environments, which means that this type of engineering applies to almost every discipline. Safety engineers ensure that buildings are structurally sound, that advanced factory systems are designed with safety at the forefront, and that workers have best-in-class clothing and equipment that protects them in specialized and hazardous environments. Whether with medical equipment, airplanes, power plants, or handheld devices, safety engineers are making sure that the priority is protecting the humans interacting with engineered technology.

In effect, safety engineers are tasked with preventing and investigating incidents involving injury, death, or property damage. The BLS shows that in 2019, 27 percent of health and safety engineers worked in manufacturing with construction being the second-highest employer at 15 percent .