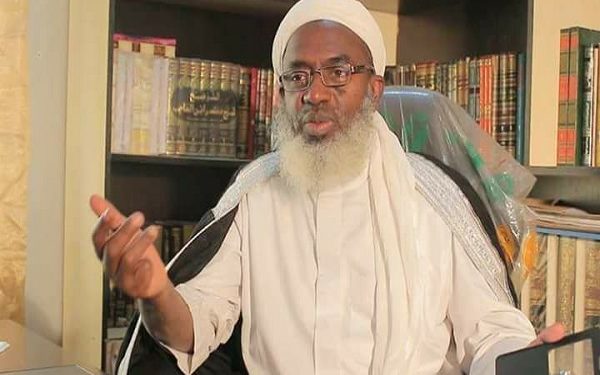 Islamic cleric, Ahmad Gumi has joined the conversation of death for blasphemy, saying that Prophet of Islam, Muhammad (SAW), did not at anytime kill anyone despite the fact that he was insulted severally.

Gumi said this while conducting a religious teaching class in his Kaduna Juma’at mosque, according to reports.

As per Premium Times, in a video clip obtained and translated by PRNigeria, Gumi said the prophet’s refusal to avenge the insults non-Muslims were raining on him while he was alive, was because he did not want to be regarded or tagged a killer.

His statement was a reaction to the recent lynching of Deborah Samuel, a female Christian student at Shehu Shagari College of Education in Sokoto, over alleged blasphemy.

He said: “Anyone who kills a non-Muslim who they have agreed to live peacefully with, will not smell the fragrance of Paradise for 40 years.

“If we think by killing Deborah, people who are not of the same faith with us will stop insulting our prophet, then we are in delusion,” he concluded.

The former Chief Executive of National Health Insurance Scheme (NHIS), Prof Usman Yusuf, accompanied his bosom friend and renowned Islamic cleric, Ahmad Abubakar Gumi, deep into large forests  across States in the North to meet with six different bandits commanders, including the once dreaded Bello Turji, who is said to have killed thousands of innocent people and displaced them from their communities.

At the 4th Annual Peace Conference and General Assembly organised in Abuja this week by the Interfaith Diaogue Forum for Peace (IDFP), Yusuf shared some of his observations in the forest with over 120 Muslim and Christian clerics gathered at the event.

He said the bandits were mainly kids between the ages of 10-12 years who have completely become hooked to hard drugs, but reverence clerics so deeply as ‘Men of God’.

Yusuf said: “When we went into the forests, we met all these criminals; we met Turji, Dogo, and four other bandit commanders. In Zamfara where we started, banditry is the beginning of the cancer of the current insecurity.

“As we journeyed to see Turji, he was surrounded by a battalion of his recruits. They were all dressed in military fatigue, but operated deep into the forests.

“We saw kid-soldiers between the ages of 10 – 12 years. They have become bandits who are armed to the teeth, and are even killing each other.”

He added, “When we went to the forest in Niger and other Northern states, deep into the forests, we saw with our eyes kids who were shooting under the influence of drugs.

“On the way into the forest in Niger, in one of the villages we passed through, I said we should stop over by one chemist shop. I went into the drugstore to check out what they sold.

“Behold, these are the drugs of choice for these bandits; codeine, tramadol, Pentazocine, intravenous drugs, Sudrex which is paracetamol and hydro-caffeine, Boska and marijuana. I found all these drugs in the little chemist shop in that village. The chemist shop owner is neither a local drug attendant nor a pharmacist.

“In the heart of the forests, I saw these kids shooting intravenous drugs and smoking marijuana. All the ransom they are paid they used to purchase drugs and to buy arms. Go across the border in Niger republic, they buy arms worth hundreds of millions of Naira. When you see them, you will be  forced to ask yourself where is the money (ransom)? They spend it on drugs and arms.

“Each of the six warlords that  with us from across the states, their respective convoys consist of about 200-300 motorcycles carrying three persons on each one.”

Yusuf maintained that most of the bandits they came across during their visits to the forests bore sophisticated weapons.

While calling for a concerted effort to tackle Nigeria’s drug menace, he said the country was in more serious trouble than many people including the authorities imagined.

According to him, “Drugs are fueling the insecurity witnessed all across this country. I call on the NDLEA instead of staying only in the airport looking for cocaine that is going to America or Europe, it should work with the governors and make sure that no chemist is selling drugs like tramadol, pentazocine and others. Drugs are fueling all the criminality in the society, not just banditry, but also Boko Haram, ISWAP, and IPOB/ESN. We are in a more serious trouble than we think.

Yusuf also revealed that Gumi’s entourage observed an ongoing civil war within the various camps formed by the bandits in the forests.

“In the forests, more leaders of bandits have been killed by fellow bandits than by security agents,” he said, adding that “We cannot pretend there’s no insecurity threatening this nation. We have been all over this country looking for solutions.”

However, he explained that because the bandits in the forest have deep respect for the clergy, religious leaders can play vital roles in resolving the nagging insecurity in the land.

Yusuf said, “Turji told us he would not have gathered for anybody if not for the clerics. They knew it was a cleric coming. We sat on the floor, surrounded by these kids who are high on drugs and heavily armed.

“So, the only way to take care of this problem is through clerics, because they respect clerics all over the country. Turji repeatedly told us he would not have gathered for any politician.

“I saw the power and how they listened to clerics. One of the kid-soldiers touched me and said ‘What’s the name of this cleric beside me?’ I told him, ‘the man is Sheikh Abubakar Ahmad Gumi.’ The next time the boy touched me, he handed me a N500 note to give to him (Gumi).

“Although there’s going to be a role for the military in defeating banditry in Nigeria, there’s not going to be a military solution to the problem, because never in the history of warfare has conflicts like this been won on the battlefield,” he stressed.