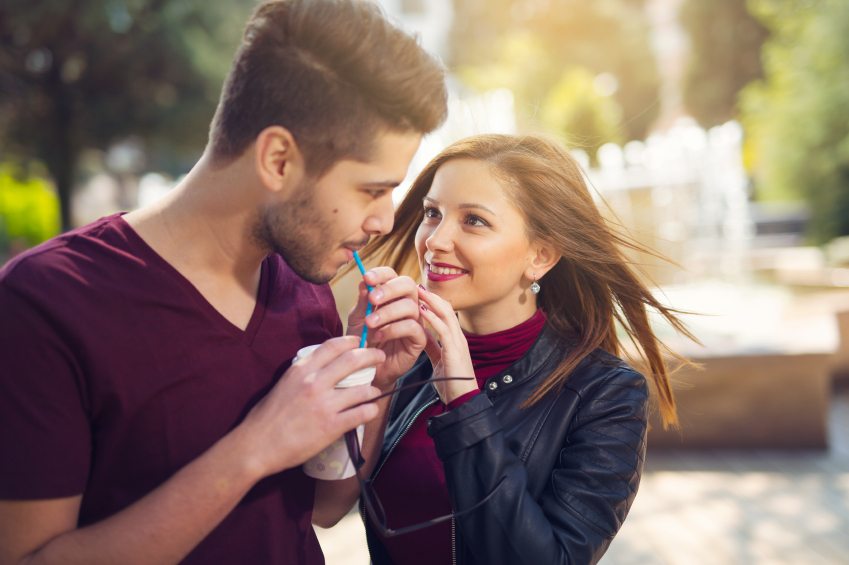 When you’re flirting with a woman, it can sometimes be hard to know if it’s mutual, or if she’s just being kind. Happily, for those in the know, there are some common signs that she likes you. From lingering touches to teasing talk, we’ve rounded up 10 of the biggest signs that she’s into you too – and created a quiz to help you decide.

If you’d like to know if your feelings for a woman are returned, take our quick quiz and then read on – the quiz numbers match up to explanations that will teach you how to read the signs she’s attracted to you.

Is she into me? The top 10 signs she likes you

1. She’s very touchy-feely with you

One of the strongest signs she likes you is touch. Jeremy Nicholson M.S.W., Ph.D. (aka The Attraction Doctor), points out that if someone is making a number of excuses to touch you, or be touched by you, it’s a really strong signal that they enjoy your company. This is especially true the less formal the interaction gets1 – so if she’s brushing your arm, it’s good, if she’s dusting some lint off your jacket it’s better, and if she’s giving you a lingering hug, it’s great.

2. She asks you a lot of questions

Kimberly Moffat is a Canadian relationship therapist, whose YouTube dating advice channel has racked up over 18 million views. In one video, she talks about trying to get a man’s attention and mentions that, if you want to flirt and get to know him, the simplest way to start is just by asking him questions. It’s not hard to extrapolate from there and say that if a woman is asking a man personal questions it’s a great sign that she’d like to know him better.

3. She remembers your interests and follows up on them

If a woman is regularly texting or messaging you, it’s one of the signs she likes you – especially if she initiates these texting sessions as much as you do, and fleshes her message out with fun, flirty emojis. There are extra bonus points to be had if these messages are bolstered with videos or links that connect to something you love. This means that not only is she thinking about you, she has taken the time to remember your interests.

4. She finds you hilarious

people about attraction and found that women’s most-desired trait in a man is a sense of humour: women like men who make them laugh. Interestingly though, a University of Stirling study showed that finding someone funny is not an objective thing. In fact, it’s more of a symptom of attraction – if you’re already drawn to someone, you’ll find them funny.2 So, if a women is laughing at your jokes (even the bad ones), it could be a sign she’s into you.

It may seem like a tactic straight from the elementary-school playground, but it’s not just kids who use playful teasing to demonstrate that they like someone. The theory goes that teasing is a low-risk way to escalate the intimacy of a conversation, as it allows two people to get into personal territory while still keeping things on the lighter side.3 So, take note: if a woman is ribbing you about your hockey team, or tickling you, chances are she likes you.

6. She draws attention to her neck and shoulders

Elite Singles recently spoke with dating and image therapist Kimberly Seltzer about body language attraction, and the non-verbal signals that people use to telegraph their interest. According to Seltzer, one of the signs a woman likes you is if she draws attention to delicate areas like her neck and shoulders. If she’s twirling her hair or fiddling with a necklace, it could be a way of (subconsciously) displaying the fact that she feels comfortable in your presence.

7. Her feet point towards your and she leans in when you speak

Women’s body language flirting involves more than their hair. There’s actually a range of subtle physical cues that show she’s into you. Start by looking at her toes: if a woman likes you, chances are her feet will be pointed right at you.4 Is she standing close to you? Great! Experts say our personal space bubble extends approximately 45cm around us, and that if someone lingers in this space, they might be hinting that they’re interested !5

8. She removes physical barriers between you

According to Jack Schafer Ph.D. one of the more unusual signs of attraction is the removal of (physical) barriers. The theory goes that someone who is unsure of another person will subconsciously put a token ‘barrier’ between them, like a purse or a coffee cup. If there’s no barrier – if, for instance, the woman you’re talking to moves her cup to one side, or puts her purse on the floor, then it could be a signal she’s ready to open up her life to you. 6

9. You often see that she’s typing (then deleting) a message

Most iPhone users know the score. You’re messaging back and forth with someone and, every time, three dots appear and disappear before their message finally arrives. Other messaging services might instead display a note that the sender is typing, but the principle is the same: if she’s taking an awfully long time to compose cute little messages, it’s very probably because she wants them to be perfect. And that’s a great sign she likes you.

The above signals are great as a general indictor that a woman is into you. However, it’s also vital to remember that all women are different and that therefore, there can’t ever be a 100% definitive list of signs she likes you. To really know the truth, you have to bite the bullet and straight-up ask her out. If she says yes happily and speedily then it’s a great sign your feelings are reciprocated. Congratulations – and happy dating!

READ MORE:  Why ‘Fine’ Isn’t A Feeling, And Why You Should Care

How To Understanding Men In Relationships-7 Truths