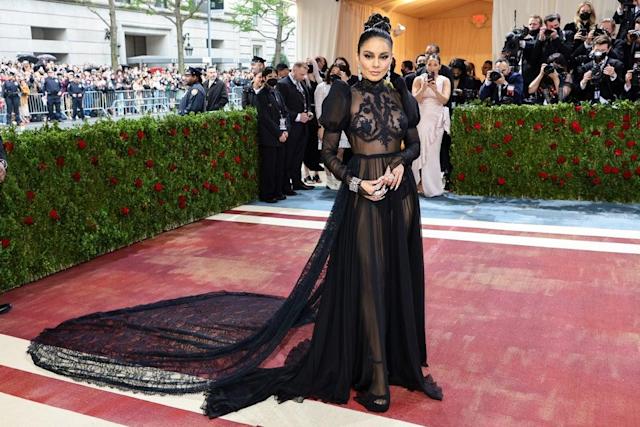 Just eight months after the last Met Gala, stars were back again to wow their fans with fashion for a second time. The theme they were to adhere to? “In America: An Anthology of Fashion” . The head curator of the Museum of Modern Art’s Costume Institute, Andrew Bolton, explained to Vogue that the theme was based on a two-part exhibition, adding, “The stories really reflect the evolution of American style, but they also explore the work of individual tailors, dress-makers, and designers.”

Kate And William’s Silence On Their Anniversary Is Turning Heads

People noted that invitees were asked to dress in “gilded glamor and white-tie.” And according to Vogue, the idea was to embody The Gilded Age with fashion. That time period would have been from 1870 to 1890 and conjures up images of a booming industrial revolution and not-seen-before affluence (via History).

So who totally got the assignment and hit the fashion mark?

Vanessa Hudgens
Kicking off the night of look-at-me fashion right was a very sexy Vanessa Hudgens, whose dramatic, sheer black gown featured a train and puffy shoulders. The negligee-like look was created by Moschino and those shoes? Well, Jimmy Choo of course (via Vogue). Hudgens seemed to know she looked amazing with an attitude to match the daring ensemble. Twitter was on board, with one fan of the star’s look claiming she saved the entire event.

Blake Lively
It’s no surprise that Blake Lively is on our list of best-dressed stars at the 2022 Met Gala. Her fashion track record speaks for itself and this year was no exception, with Elle hailing the actress and her husband Ryan Reynolds “fashion royalty” upon their arrival on the red carpet. Was it her rose gold opera-length gloves, the tiara, the giant bow at her waist or the voluminous train that accentuated Lively’s geometric shape-adorned gown that fans loved? According to Twitter, all of it.

Blake Lively, again
Sleeping Beauty is that you? In an incredible touch reminiscent of Aurora, Blake Lively’s gown opened up to reveal another color completely. The baby blue and rose gold “second gown” was awe-inducing, plain and simple. Her arm candy (Ryan Reynolds in a dapper black tux with his trademark super cool smoulder) didn’t look half bad either. There’s no doubt that the actress was the queen of the Met Ball, and deserving of making our list of best-dressed attendees not once, but twice.

Janelle Monáe
The next queen of the Met Ball was indisputably Janelle Monáe, whose glimmering gown and glittering headpiece looked simply regal on the red carpet. We also loved the matching cuffs. Did we mention the stunning ensemble featured a completely open back and that someone has been seriously hitting the gym?Twitter was in favor, with one person sharing this take on the star’s look: “classy, elegant, sexy, on theme, a little bit different, a little bit familiar. all absolutely stunning.”

Mindy Kaling
Perhaps the most shocking moment on the Met Gala red carpet was when Mindy Kaling arrived. Not only was her recent weight loss evident, but the star’s choice of a soft lilac-hued gown showed a completely different and very feminine side of the typically seemingly fashion-neutral actress (via People). We adored the floral accents at the shoulders and her dramatic cape. Overall, Kaling definitely came to the carpet to be noticed and we are blown away.

Camila Cabello
Drama and playfulness is a combo few can master. Adding in a dash of sexiness to this winning mix was Camila Cabello, whose gown was not even remotely short on interesting elements. The white dress featured a cutout midriff, a super-long tain, a unique neckline and a floral accent at the waist. Although the look may have been too all over the place for some, we were fans simply because Cabello’s choice made us do a double and even a triple take.

Sarah Jessica Parker
Sarah Jessica Parker, we bow down to you, forever. The Met Gala staple did not disappoint this year, wowing fans in a buffalo plaid gown with a princess skirt and long sleeves. A feather plumed headpiece completed the look in a way that only the “And Just Like That…” star can pull off.

We say next to Blake Lively, this was Parker’s night. Can a Kardashian even steal the spotlight from this indelible diva?

Alicia Keys
Let’s hear it for New York! Taking a cue from one of her most well-known songs, Alicia Keys did The Gilded Age proud with her gown, which paid homage to the seat of industry, New York City. The show-stopping cape was an art piece in and of itself, nevermind the singer’s flattering, glittery gown. We were definitely inspired by the bright lights of this one-of-a-kind look. Oh, and we feel brand new. Thanks, Alicia.

Gigi Hadid
Sometimes taking a huge fashion risk pays off, as it did in the case of model Gigi Hadid’s jaw-dropping look for the 2022 Met Gala. Her puffer jacket-inspired overcoat was a vision and made for an unforgettable red carpet moment everyone will be talking about for years to come. No one expected an ensemble like this one, and Hadid slayed.

Whether the look was on theme for the night is another question.

Kim Kardashian
Kim Kardashian’s look was definitely the most highly-anticipated of the night. So let’s break it down. Her body looked incredible (thanks SKIMS!). The dress was very flattering and gave us Marylin Monroe vibes. That fur-like wrap was very high-glamor.

And the hair? Okay, blonde now. Kardashian definitely played it safe, though. And she deserves to be on the best-dressed list. But this is not a Met Gala look we will remember forever, it must be said