Bullied at school, this teen and her sister start campaign to encourage ‘active bystanders’ 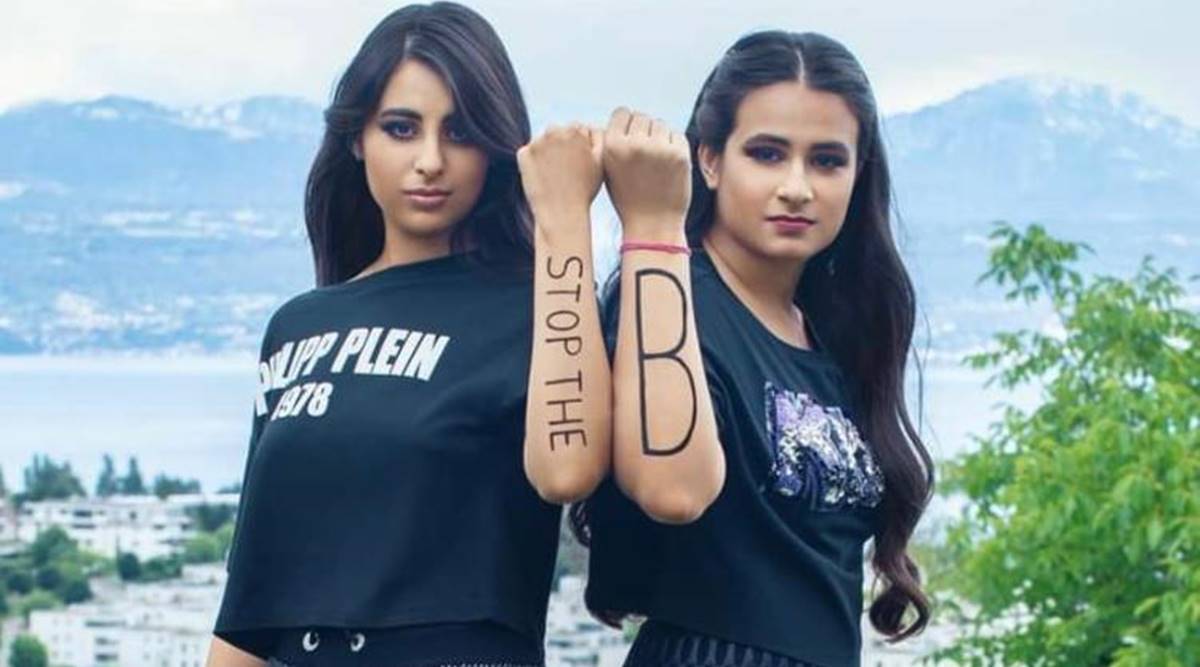 Riddhi and Vasundhara Oswal, who are running an anti-bullying campaign. School violence and bullying have emerged as “major problems worldwide”, according to a 2019 UNESCO report, with about one in three students bullied by peers at school, including both male and female students.

Riddhi Oswal, 16, who resides with her family in Switzerland, experienced a similar trauma that eventually forced her to leave school. But the challenges continued in her next school, too. While her parents moved the court against constant bullying, Riddhi and her sister Vasundhara, 22, initiated an anti-bullying campaign, Stop The B, to not just support victims, but also encourage people to be active bystanders.

:What is ‘Stop The B’? When did you begin and how has the progress been?

Vasundhara: It is an anti-bullying campaign for young people by young people founded in October 2019. We think by making the campaign interactive and fun, we can give voice to teenagers who are being bullied, and reassure them they are not alone. Through our platform, we want to encourage them to speak about their experiences. This will help them feel supported, and help bystanders develop empathy towards people being bullied. We have received numerous messages from our followers who told us how our page has helped them feel slightly less alone; many have even said they feel they can start anew after watching/being featured on our page and having their stories aired publicly.

How would you (Riddhi) say bullying affected your well-being?

Riddhi: Almost two years ago, while I was at my previous school, I started to experience mocking from some of the other students who would say nasty things about my ethnicity and personal beliefs, and also isolate me. My parents and I approached many teachers and the school management, but they did not do anything to help; things just got worse! The school lowered my evaluation grades and shockingly even cancelled my re-enrollment. This has also been recognised as a classic example of ‘double punishment’ of the victim by the school, by academics and experts in the field of school violence and bullying.

This (expelling me) made it worse, as the bullies then began to believe they were right and share mean posts about me on social media and online group chats. This was upsetting and the fact that it was all online meant it was hard for me to ignore or get away from. Eventually, I had to quit these chats. The harassers found out about the new school I was joining and even made it their agenda to find the kids who would be my classmates there, and started spreading rumours about me via digital platforms even before I joined. It was really bad — no one wanted to talk to me because of all the hate and rumours.

It was particularly sad as other kids, who noticed what was happening, did not step in, perhaps because they were scared of what would happen if they reported it. This was extremely tough and I felt a part of my life was torn from me and everything around me was just a bad downward spiral.

Only after speaking with my family did I realise this was not normal and that I shouldn’t be suffering in silence. It was this that made us realise something needed to be done. We (my older sister and I) realised a lot of kids don’t want to step in because they are worried they may become a target, or parents and teachers may not take them seriously and instead (double) punish them.

This is a real problem as academics have shown when an active-bystander steps in, the bullying stops in 10 seconds, 57 per cent of the time. That means more than half the bullying in the world could simply stop if kids speak out when they see something wrong being said or done. We want more people to intervene or report bullying.

Also Read |Staying silent about cyberbullying is no longer an option

What was the reaction from friends and family when you pitched the idea initially?

Vasundhara: Our parents were supportive. In fact, it was a unanimous decision to start the campaign as we truly believe only by helping others can we help ourselves, too. They understood that if Riddhi could go through something as dreadful in what is known as “the most expensive/exclusive school in the world” there would be millions, especially lesser-privileged children, who would be going through the same and would be forced into suffering in silence. We are thankful for their support, we could not have made it this far without their love

Riddhi: It was another situation for some of my classmates in my school. I felt many of them did not want to notice the campaign as they were all partly bystanders to my own personal situation. Only a few close friends were supportive and eventually, some people who were previously bystanders, came forward and applauded the campaign. Of course, there still are people who do not acknowledge and continue to speak badly about it.

Take us through some of your anti-bullying initiatives.

Riddhi: Our campaign tries to challenge the social stigma of reporting bullying and encourages youngsters to recognise, speak out and become “active bystanders”. We have lots of giveaways such as the #activebystander giveaway and our more-recent #make-good challenge. In #activebystander giveaway competition, we encouraged people to share their stories by making artwork or videos about what being an ‘active bystander’ means to them, and we had creative entries from across the globe. We had a young girl who went around being an active bystander for all the people whom she came across that were receiving cyber hate comments, although they were strangers to her. In our more-recent challenge, we encouraged people to write a note, or post a video reel apologising for a time when they think they may have upset someone or not done enough to stop bullying. One of the winners created a real-time video of their apology in which he went to the house of the person in question and apologised for teasing/being offensive to them.

Vasundhara: Stop The B is lucky to have partnered with some of the top academics who are experts in the anti-bullying space in Switzerland and the US, to ensure that the data and infographics we share are backed by the latest and credible academic studies. Besides, former international footballer Ronaldinho recently shared a video and message in which he talks about the seriousness of bullying and demonstrated his support for ‘Stop the B’.

Do you find parents, school authorities sometimes being in denial that their children may be bullies or victims of bullying?

Riddhi: Sadly, yes. My old school went to the lengths of terminating my re-enrollment, basically expelling me because of how “in denial” they were. And because of that, even the perpetrators continued with their agonising behaviour.

My mother had even tried to reach out to one of my harasser’s parents when the bullying transferred to the new school, but received no response. It was painful to see even the other children I had known for seven years (basically my whole childhood, as I’m 16 years old now and the bullying started when I was 14) turned on me, in order to feel as though they are a part of “the group”. We were left with no choice but to take the case to court and only after the proceedings started did the harassment die down a little.

How has the response to ‘Stop The B’ been so far? Any instances you would like to share?

Vasundhara: Recently, we have had one person from the LGBTQ community share their experience of being bullied at school. Elsewhere, lots of our followers have told us they often experience mean insults and accusations online. We also had an Indian boy share a really fun rap song he made, about his feelings towards the body-shaming he personally experienced. We have had several other people that have used our platform to speak out about their own bullying experience and the harassment they have faced.

Has COVID-19 led to an increase in bullying?

Riddhi: Bullying has definitely increased due to the pandemic, as more children are now online and there are not enough rules and regulations concerning cyber-bullying.

Vasundhara: At the same time, we believe it also presents an opportunity to tackle it as families are now in the same household almost all day. It’s easy for children to go up to their parents when there is something wrong or when they feel like they are being bullied. So, we urge parents to encourage their children to speak to them about their feelings openly.

READ MORE:  Which Animal Has The Stretchiest Mouth?