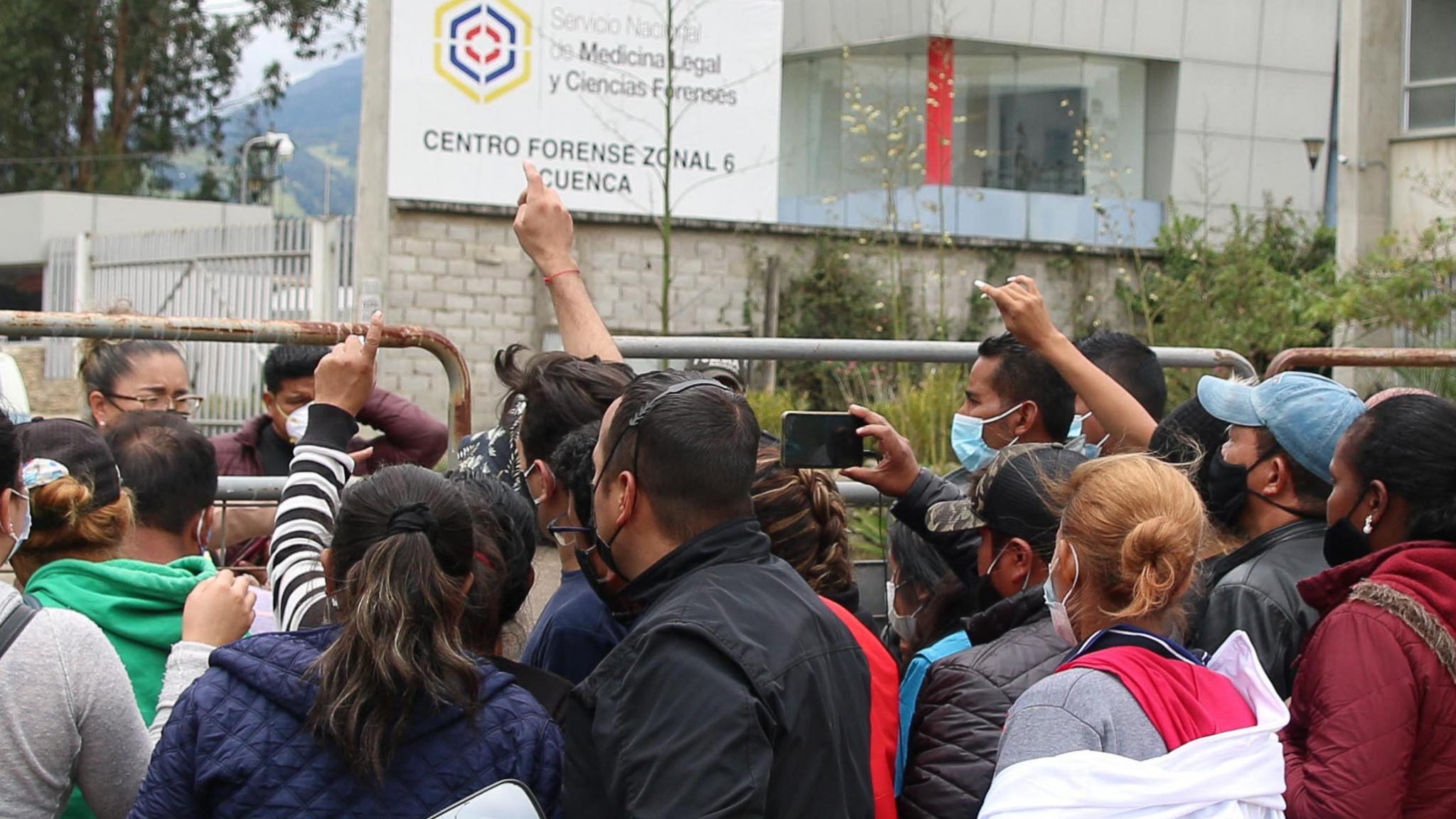 Relatives of the deceased prisoners wait to receive the bodies outside the Zone 6 Forensic Center in Cuenca, Ecuador, on February 24, 2021. – At least 79 inmates died in simultaneous riots blamed on gang warfare at four prisons in Ecuador, officials said Wednesday.

The body count from simultaneous riots at four prisons in Ecuador rose to 79 Wednesday as family members arrived to claim the remains of loved ones killed in hours of full-out gang warfare that left inmates decapitated and burnt.

The extent of the violence, described as an “unprecedented massacre” by Ecuador’s human rights ombudsman, exposed the power of prison gangs and shocked the South American nation of 17 million people now looking for anwers.

The United Nations mission in Ecuador called for a “prompt and impartial investigation” and for “sanctioning those responsible and a management of the crisis in accordance with the rules of the Constitution and international human rights instruments.”

Updating the toll from Tuesday’s violent uprising, the SNAI prison authority said it had retaken control of the four targeted prisons, which jointly hold more than two-thirds of the country’s inmate population.

The military had to be deployed to help quell the uprising.

The SNAI said 37 prisoners had died at two jails in the western port city of Guayaquil, 34 at a prison in Cuenca in the south, and eight in the central Andean town of Latacunga.

Several more were injured, as were a number of police officials.

Among the first on the scene was Rolando, who came to collect the body of a family member but said he had been trying unsuccessfully for hours to get information out of police and soldiers guarding the jail.

“Nobody tells us anything, nobody wants to inform us or give us the names of those who are dead,” said the 45-year-old, who declined to provide his family name.

Digna Pacho, 63, said she had travelled 14 hours by bus to fetch the remains of her son. Christened Jacson, to her he was “Nato.”

Pacho said she wants to bury her son at home in the northern coastal city of Esmeraldas, hundreds of kilometers away in a place much warmer than the freezing plains around Cuenca.

“My son was serving a sentence of 35 years. He was accused of killing someone in a revolt in Esmeraldas,” she told AFP, sitting trembling on the sidewalk, waiting.

“I just want them to give me Jacson’s body and I’ll go back to Esmeraldas.”

According to the SNAI, no wardens or police were killed in Tuesday’s seemingly orchestrated uprisings.

“I never saw a situation like yesterday,” said Ana Arpi, who has run a food store near the prison’s main entrance for nine years.

Relatives had arrived in the morning to visit family members, “but they fled in terror because they were also going to be killed. Everything was crazy,” she said.

In one of the operations following the clashes in Guayaquil, “firearms, knives, machetes, cell phones and drugs were seized,” said local prosecutor Carlos Vaca. “The weapons were used in the aggressions between detainees.”

President Lenin Moreno has since ordered the defense ministry to “exercise strict control of arms, munitions and explosives” at the country’s prisons.

Last year, he had declared a 90-day state of emergency exactly to try and bring gang activity under control and reduce the jail violence.

Yet 103 inmates were killed in prisons last year, according to the office of Ecuador’s human rights ombudsman.

In order to reduce prisoner numbers amid the coronavirus epidemic, the government commuted the sentences of people convicted of minor offences, reducing overcrowding from 42 percent to 30 percent.

This still left Ecuador’s prison system, with a capacity to house 29,000 inmates in 60-odd facilities, with a prisoner population of 38,000.

There are 1,500 guards to oversee them a shortfall of about 2,500 that the SNAI has previously said “hinders immediate response” to frequent prisoner revolts.

Moreno on Tuesday attributed the riots to “criminal organizations” engaged in “simultaneous acts of violence in several prisons.”

And the SNAI said it was a continuation of fierce territorial fighting between organized gangs that go by names such as Los Pipos, Los Lobos and Tigrones and operate their criminal enterprises, including drug trafficking, from prison.