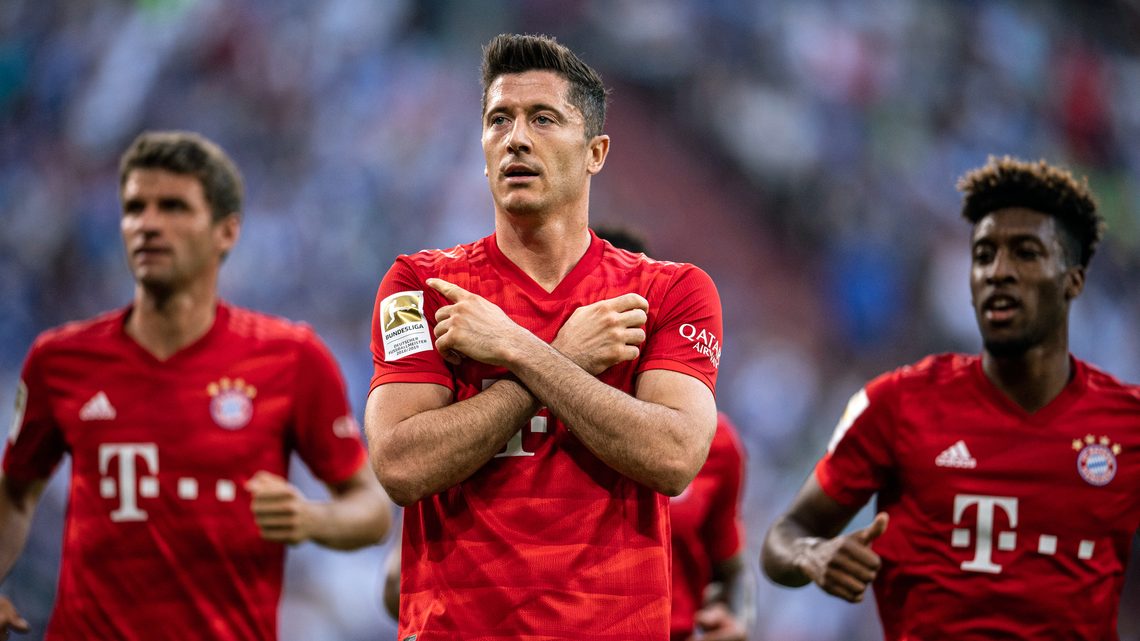 Robert Lewandowski set a new record for the first half of a Bundesliga season on Sunday by netting his 21st league goal of 2020/21 as leaders Bayern Munich went four points clear with a 2-1 win over Freiburg.

Lewandowski’s early strike was cancelled out by a Nils Petersen equaliser before Thomas Mueller grabbed Bayern’s late winner having earlier set up his team-mate’s record-breaking goal.

Bayern, the only top five club to win this weekend, ended Freiburg’s five-match winning streak in the league.

“We were a bit lucky, but I’m happy with the result and now we have to continue on this path against Augsburg and Schalke,” said Bayern coach Hansi Flick with one eye on next week’s two league games.

With a game in hand, Lewandowski has broken Gerd Mueller’s record of 20 goals in 17 matches for the first half of a German league season set in 1968/69.

He is also on course to break Mueller’s all-time record of 40 goals in a single Bundesliga season from 1971/72. At exactly the same point during that record season, 49 years ago, Mueller had scored 17.

Before kick-off, Bayern board member Oliver Kahn said the European champions will not sign any new players in this transfer window.

However, Bayern again looked vulnerable and jaded after a league defeat at Moenchengladbach and shock German Cup exit at second division Holstein Kiel.

“We worked hard for that and we wobbled a bit at the end, but it’s important we showed that we can fight,” said Bayern defender Jerome Boateng.

“We don’t have to always shine and not everything has been perfect in the last few weeks.”

As heavy snow fell in Munich, Lewandowski needed just seven minutes to give Bayern the lead when he fired home Mueller’s pass after a Serge Gnabry run.

Leroy Sane replaced Gnabry around the half-hour mark after the Germany winger limped off with a thigh strain.

Lewandowski hit the post early in the first half and Freiburg goalkeeper Florian Mueller reacted quickly with a low save to deny Leon Goretzka.

Petersen grabbed Freiburg’s equaliser a minute after coming on as his low diving header hit the net from his first touch of the game on 62 minutes.

It was the 28th time in his career that Petersen, 32, has scored as a replacement.

Mueller restored their lead when he side-footed Sane’s attempted volley into the net for the winning goal 16 minutes from the whistle.

However, the visitors laid seige to Bayern’s goal and nearly equalised when Petersen clattered the Bayern crossbar just before the final whistle.

Later, Real Madrid loanee Luka Jovic came off the bench to score twice in his first game back at Eintracht Frankfurt to seal their 3-1 win over bottom side Schalke.

The 23-year-old Serbia striker, who joined Real in June 2019 in a transfer worth around 60 million euros ($72 million), has been loaned back to Frankfurt for the rest of the season.

Despite netting just twice in 32 appearances for Real, Jovic showed superb finishing for his first goal on Sunday just 10 minutes after coming on.

“It was like a script from a Hollywood film,” said Frankfurt director Fredi Bobic.

It was his first game for two months after contracting Covid-19 in November, followed by injury, but Jovic then struck again just before the final whistle in Frankfurt with another clinical strike.

However, the Royal Blues are again last in the table because of Mainz’s 1-1 draw at Dortmund on Saturday.