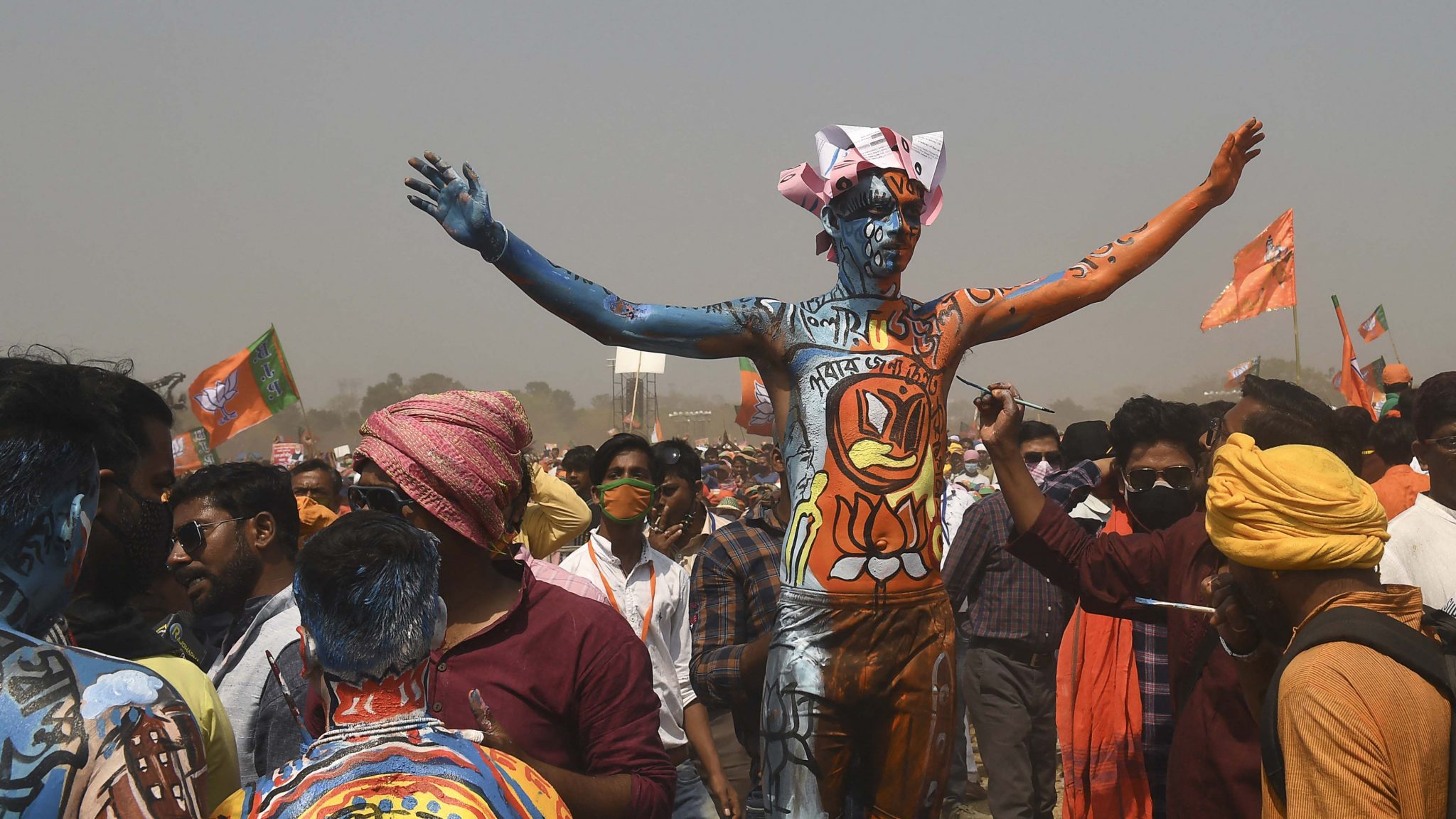 A Bharatiya Janata Party (BJP) supporter with his body painted gestures during a mass rally addressed by India’s Prime Minster Narendra Modi ahead of the state legislative assembly elections at the Brigade Parade ground in Kolkata.

A crowd of up to 800,000 turned out for a state election rally by Indian Prime Minister Narendra Modi Sunday, as he sought to unseat one of his fiercest critics in a campaign hit by violence.

Modi’s Hindu-nationalist Bharatiya Janata Party (BJP) has been seeking to expand its power at the state level, and is eyeing the eastern state of West Bengal where the larger-than-life Chief Minister Mamata Banerjee has ruled for a decade.

The state, home to more than 90 million people with some 73 million eligible to vote in the staggered polling that kicks off on March 27, has so far eluded the BJP.

“The next 25 years of development are very important for West Bengal. We want it to lead India when it celebrates 100 years of its independence,” Modi told the rally at the Brigade Parade Ground in the capital Kolkata, which can hold up to a million people.

Supporters held up life-size cardboard cutouts of Modi’s image under the blazing sun. Hundreds also watched the rally from the rooftops of high-rise buildings overlooking the site.

“Our (state) government will work to re-establish the public’s belief in government systems, police and administration… We are here for change, a change that brings economic prosperity, jobs and development for all sections of the society,” Modi added.

Banerjee, 66, remains popular but there are growing signs of anti-incumbency among voters, while some allies have switched sides to join the BJP.

West Bengal, like in its previous polls, has been beset by political violence with workers and activists attacked and several killed.

Modi’s campaign was boosted by veteran Bollywood actor Mithun Chakraborty, who announced at the rally that he had joined the BJP.

Teacher Tapas Burman, who travelled from his village 40 kilometres (24.8 miles) from Kolkata to attend the rally, told AFP voters were “ready for change”.

The BJP’s push to highlight allegations of corruption, nepotism and minority politics against Banerjee and her Trinamool Congress party has seen them become only marginal favourites to hold on to power, political strategist Amitabh Tiwari told AFP.

Tiwari said the poll would also be a referendum on a disputed citizenship law introduced by the national government in late December that sparked violent protests including in Kolkata.

The results of the West Bengal poll will be announced by the Electoral Commission on May 2, alongside several other state and territory elections in Assam, Kerala, Tamil Nadu and Puducherry.