Protests Break Out In Benin Before Election 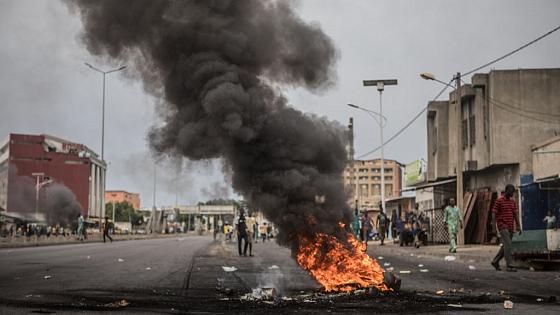 Billboards with photographs of incumbent Benin President Patrice Talon (R on billboard) and his running mate Mariam Talata (L on billboard) are displayed on a road in Cotonou on April 6, 2021. – Benin’s 5.5 million voters are set to go to the polls on April 11, 2021 for a presidential election in which the incumbent Patrice Talon is the favourite. The president elected in 2016, will face two opposition candidates virtually unknown to the general public, former deputies Alassane Soumanou and Corentin Kohoue.

Protests broke out across Benin on Monday night and Tuesday as opposition leaders called for demonstrations days before President Patrice Talon faces an election.

Tensions erupted in at least six towns around the West African country, local residents and witnesses said, ahead of Sunday’s ballot in which Talon is strongly favoured to win a second term.

Benin has long been seen as a vibrant multi-party democracy but critics say under Talon the country has veered into authoritarianism and opponents have been sidelined or forced to flee into exile.

Opposition leaders say the April 11 election is already rigged in favour of Talon, a cotton magnate first elected in 2016.

Former finance minister Komi Koutche, in exile like many of Benin’s opposition figures, called on people to take to the streets to “mark the end of the Republican mandate handed over to Talon”.

On Monday evening, groups of several dozen and at times even a few hundred demonstrators gathered in multiple towns in the centre and north of the country, known to be opposition strongholds, where Talon campaign vehicles were ransacked.

In the economic capital Cotonou, marks of the previous night’s protests were still visible on Tuesday at the city’s Red Star square where the tarmac was charred from burned tyres.

In Parakou, in the north, a stronghold of former President Boni Yayi, Talon’s campaign headquarters were vandalised, along with the premises of a private radio station.

On Tuesday morning in the capital Porto Novo, dozens of supporters of Sebastien Ajavon, who came third in the last presidential election and is also living in exile, “invited the army to take power” during a demonstration.

Alain Orounla, a government spokesman, told local radio station that “the election will take place on April 11” and promised “nothing will happen” dismissing those calling for rebellion.

On Monday, a senior Benin judge fled the country, condemning political pressure to convict and detain an opposition candidate in early March.

At the time of his election in 2016, Talon said he wanted to serve a single term, before retracting and announcing his candidacy in mid-January.