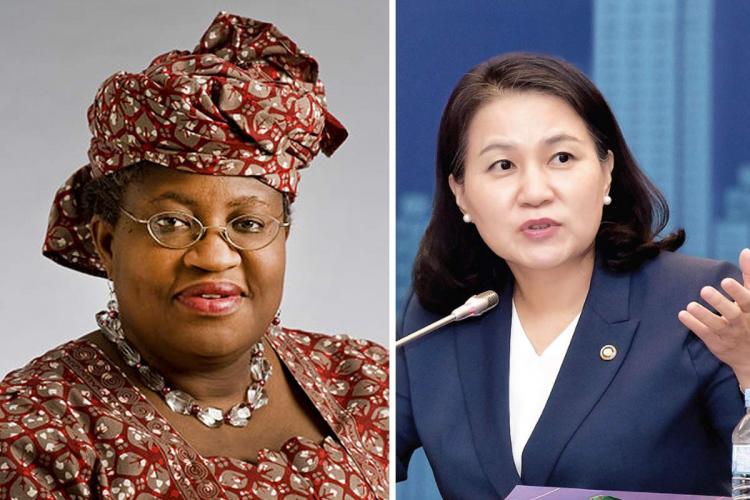 (COMBO) This combination of file pictures shows South Korean Trade Minister Yoo Myung-hee (L) in Geneva on July 16, 2020; and Nigerian former Foreign and Finance Minister Ngozi Okonjo-Iweala (R) in Geneva on July 15, 2020, as they give press conferences as part of their application process to head the WTO as Director General. – South Korean trade minister Yoo Myung-hee on February 5, 2021 abandoned her bid to become head of the World Trade Organization, Seoul said, clearing the way for Nigeria’s Ngozi Okonjo-Iweala to become the global body’s first woman and first African director-general.

Yoo had consulted with the United States — her prime backer — and other major countries and “decided to renounce her candidacy”, South Korea’s trade ministry said in a statement.

The process to name a successor to Roberto Azevedo had been deadlocked since October, when key WTO ambassadors tapped Okonjo-Iweala as the best pick to lead the organisation but the Trump administration maintained its opposition to her appointment.

The WTO head is normally chosen by consensus, leaving the process at a standstill.

Observers suggested that South Korea was under pressure from the United States — a security ally that stations 28,500 troops in the country to defend it from the nuclear-armed North — to keep Yoo in the race.

At the same time, Seoul faced anger from African countries and others for not bowing out.

“Korea is stuck between a rock and a hard place,” one Western trade diplomat told AFP at the time.

The South’s decision to withdraw her candidacy comes two weeks after Joe Biden was sworn in as the new US president.

The WTO is widely seen as being in need of reform — even before the Covid-19 crisis hit, it had grappled with stalled trade talks and struggled to curb tensions between the United States and China.

The global trade body has also faced relentless attacks from Washington, which has crippled the WTO dispute settlement appeal system and threatened to leave the organisation altogether.

Final two
The WTO was destined to have its first woman director-general after the months-long consultations process whittled the candidates down to the final two.

Twice Nigeria’s finance minister and its first woman foreign minister, Ngozi Okonjo-Iweala, 66, trained as a development economist — she has degrees from Massachusetts Institute of Technology (MIT) and Harvard.

She spent a quarter of a century at the World Bank, rising to be managing director and running for the top role in 2012, and is seen as a trailblazer in her home country.

Similarly Yoo, 53, is known as a glass-ceiling-breaker in the South’s still male-dominated society.

An English literature graduate of the elite Seoul National University, she set aside her dreams of a literary career to become a trade ministry civil servant, later handling a number of free trade negotiations along the way.