Fin whales Could help Scientists Map What Lies Below The Seafloor 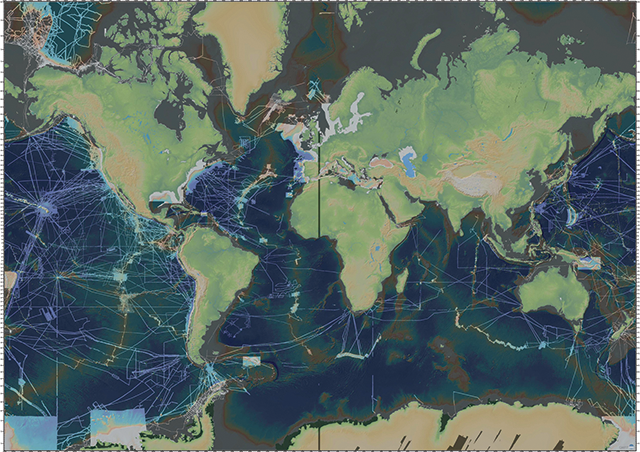 Some whales are loud. Really, really loud. Their calls are strong enough to penetrate into rock beneath the seafloor, a new study finds. And the echoes of those songs bouncing off the rocks can help reveal the structure of the Earth’s crust.

Seismologists Václav Kuna and John Nábělek are are interested in the structure of the rock layers beneath the seafloor. Nábělek works at Oregon State University in Corvallis. Kuna is at the Czech Academy of Sciences in Prague, Czech Republic. The two used a network of 54 ocean-bottom seismometers in the northeast Pacific Ocean. These instruments detect waves that travel through the ground, such as those caused by earthquakes. It turns out that they can also pick up songs from a passing whale.

Underwater sounds can produce seismic echoes. When sound waves traveling through the water meet the ground, some of the waves’ energy converts into a seismic wave. Those seismic waves can help scientists “see” underground as they bounce off different rock layers. The way they bounce can help researchers estimate the thickness of the layers. Changes in the waves’ speed also can reveal what types of rocks the waves passed through.

Fin whale songs can be up to 189 decibels. That’s as noisy as a large ship. Kuna and Nábělek‘s seismometers picked up the sound waves of a fin whale’s songs. They recorded six serenades in 2012 and 2013. Each song lasted from 2.5 to 4.9 hours. A single whale made them all as it swam.

Echoes from the songster showed the researchers that its sound waves had passed through layers of sediment and underlying rock. They revealed structural details of the crust beneath three sites along over which the whale had been singing. All three had what the scientists considered a “classic” ocean-floor structure. There were layers of sediment between 400 and 650 meters (about 1,300 to 2,150 feet) thick. Below those sat a layer of basalt rock about 1.8 kilometers (6,000 feet) thick. Beneath the basalt was a dense oceanic rock known as gabbro.

The new data suggest fin-whale songs can be effective tools to study the seafloor. Large ships may perform seismic surveys using air guns. These instruments make very loud noises that can travel long distances. But their noise can also disrupt ocean life — especially the behaviors of whales and other animals that rely on sound to hunt or communicate. In contrast, the songs of fin whales can be recorded throughout the world’s oceans. They may help seismic studies when typical survey methods are not possible or recommended.

In this recording of a fin whale’s song in 2012, sped up 10 times, each loud call is followed by a series of quieter echoes. Those echoes, scientists say, occur as the whale’s call bounces off of rock layers within Earth’s crust. Those echoes offer seismic images of crustal layers, similar to ones obtained by aiming sound waves at the ground with an air gun.