Difference Between LAN, MAN And WAN 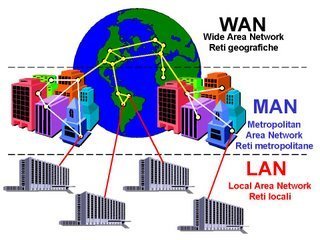 The Network allows computers to connect and communicate with different computers via any medium. LAN, MAN, and WAN are the three types of the network designed to operate over the area they cover. There are some similarities and dissimilarities between them.

One of the significant differences is in the geographical area they cover, i.e. LAN covers the smallest area; MAN covers an area larger than LAN and WAN comprises the largest of all.

Furthermore, LAN networks rely on the hardware and communication devices owned by them for the transmission. As against, this could not be possible in case of MAN and WAN which are obliged to use public, private, leased communication hardware as these networks are spanned across a magnificent area.

LAN or Local Area Network links network devices in such a way that personal computer and workstations can share data, tools and programs. Data transmits at a very fast rate as the number of computers linked are limited. LAN’s cover a smaller geographical area and are privately owned. One can use it for an office building, home, hospital, schools, etc. LAN is easy to design and maintain.

A Communication medium used for LAN has twisted pair cables and coaxial cables. It covers a short distance, and so the error and noise are minimized. LAN can be configured in the ring, bus and star topology. The ring topology is prevalent in the Token Ring LANs of IBM and bus is widespread in Token Bus and Ethernet LANs.It is a broadcast network where the message is sent to all the connected hosts as all the host share the same transmission medium (wire). Broadcasting can be done in two ways statically and dynamically. In the static technique, the hosts are provided with a definite time slice for transmitting the information. While in the dynamic method the hosts can flexibly send the frame at any particular time.

MAN or Metropolitan area Network covers a larger area than that of a LAN and smaller area as compared to WAN. It connects two or more computers that are apart but resides in the same or different cities. It covers a large geographical area and may serve as an ISP (Internet Service Provider). It’s hard to design and maintain a Metropolitan Area Network.It is costly and may or may not be owned by a single organization. The data transfer rate of MAN is moderate.

MAN can be categorised into two types: DQDB and SMDS.

WAN or Wide Area Network is a computer network that spans over a large geographical area. A WAN could be a connection of LAN connecting to other LAN’s via telephone lines and radio waves.

Wide Area Network may or may not be privately owned. A Communication medium used for wide area network is PSTN or Satellite Link. Due to long-distance transmission, the noise and error tend to be more in WAN. Propagation delay is one of the biggest problems faced here.Unlike LAN, WAN uses switching that allows multiple computers to connect with several switches instead of connecting with each other. It also uses the store-and-forward concept to transmit packets, where packets are stored in a buffer on a temporary basis then forwarded to the destination by following the predefined path.

There are many advantages of LAN over MAN and WAN, such as LAN’s provide excellent reliability, high data transmission rate, they can easily be managed and shares peripheral devices too.