Jill Biden will be no Melania Trump as America’s new First Lady.

The backdrop of flowers, teapot and US flag said it all: Jill Biden will be no Melania Trump as America’s new first lady.Melania didn’t ‘care,’ but Jill Biden wants to show she does

The backdrop of flowers, teapot and US flag said it all: Jill Biden will be no Melania Trump as America’s new first lady.

“It’s hard for me to believe it’s only been two weeks since the inauguration and already I’ve had so much to do,” Jill Biden said. 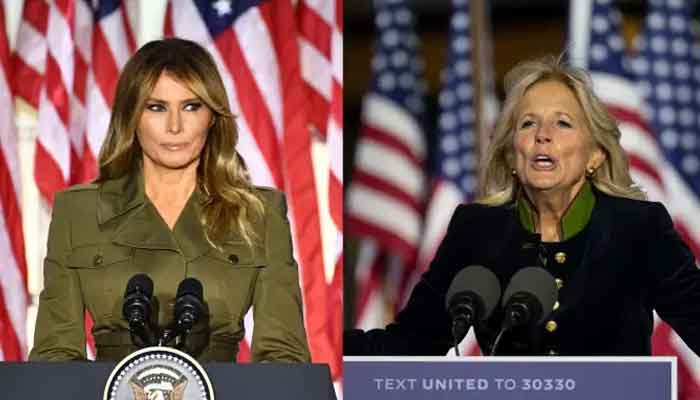 As different to Melania Trump as her husband President Joe Biden is to Donald Trump, she drew on her own military roots and middle class American upbringing to connect with others on the video call.

“I learned my love of this country from my dad,” Jill Biden, 69, said, recalling the ritual of accompanying her veteran father to a war memorial.

At a later event to support the National Cancer Institute, Biden again underlined her experience with the realities of ordinary life, as she recounted cancer taking the lives of her parents and then her son Beau at just 46 years old.

Melania Trump, who came from Slovenia to the United States as a young immigrant model and met Donald Trump, perhaps had a dramatic American story of her own.

But a private nature held her back from sharing it.

She rarely spoke at length in public and even less so in unscripted situations, unlike Jill Biden, an accomplished public speaker.

Instead, Melania Trump’s extravagant clothing often got the real attention.

This included the all black Chanel, Dolce and Gabbana and Christian Louboutin ensemble worn on departing the White House for the last time in January. By the time she landed in Florida, she’d switched into a colorful Gucci dress worth thousands of dollars — still, as was widely noted, sticking to foreign designers.

Jill Biden, who is keeping her day job as English teacher at Northern Virginia Community College, appeared Wednesday on Zoom in a sensible-looking dark suit jacket.

She did wear designer duds at her husband’s January 20 inauguration, but rather than fancy European brands she picked the New York-based label Markarian.

Melania Trump made many fashion statements, including wearing a colonial-style pith helmet to Kenya.

None, though, was more remarkable, if not downright bizarre, than her 2018 appearance in a jacket reading: “I really don’t care do u?”

Jill Biden appears to be signalling: yes, she does.

First ladies have the odd position of being married to the most powerful man in the country but without a formal public role.

So usually they pick a topic to focus on, using the power of publicity rather than law to bring change.

For Melania Trump, it was a somewhat ill-defined “Be Best” campaign for children’s wellbeing, which she promoted only sporadically.

In Jill Biden’s case, there are three topics and all have the extra heft of being deeply personal.

The first is building support for military families, a community that she knew well as mother of the late Beau, who went to Iraq with the US National Guard.

The second strand is promoting support for cancer patients and research — a topic that Beau’s death from brain cancer in 2015 seared into the Biden family identity.

The third draws on her lifelong career in education. Biden was marking student papers right through her husband’s tense presidential campaign and she makes history as a first lady with a paying job beyond the White House walls.

“That’s my passion,” she told People magazine in a joint interview with Joe Biden. “That’s my life.”

The state of the relationship between Donald Trump and Melania, his third wife, was a constant source of gossip.

The Bidens, though, are threatening to leave the tabloids empty handed.

“After 43 years of marriage there’s really not that much more to fight about,” Jill Biden told People.