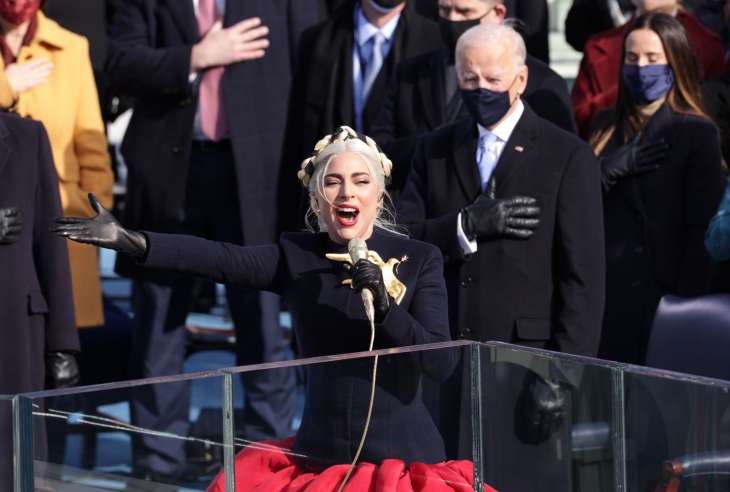 JLo snuck in the title phrase of one of her songs that’s never seemed more appropriate: ‘Let’s get loud!’

We all know Lady Gaga can serve patriotic realness. She nailed the national anthem at Super Bowl 50. And remember her Super Bowl performance intro in Houston?

She did it again Wednesday morning during President Joe Biden’s inauguration. Gaga ascended the podium in flowing red, her hair done up in a twist. She looked nervous and a bit overwhelmed, but the smile never left her face.

The United States Marine Band accompanied her during the anthem. Gaga’s rich, operatic voice carried the song into the crisp, blue sky. And as she sang, “What so proudly we hailed,” she raised her fist in triumph.

It felt cleansing. It felt restorative. And Gaga, like so many Americans, couldn’t contain her glee.

WASHINGTON, DC – JANUARY 20: Jennifer Lopez is escorted to the inauguration of U.S. President-elect Joe Biden on the West Front of the U.S. Capitol on January 20, 2021 in Washington, DC. During today’s inauguration ceremony Joe Biden becomes the 46th president of the United States. Photo: Win McNamee/Getty Images

Jennifer Lopez looked almost in tears as she launched into a pop orchestration of “This Land is Your Land” and “America the Beautiful.” There’s clear significance in a Latina singing this song after four years of an administration that demonized Latinos and caged children at the Texas border.

Musician Lady Gaga arrives for the 59th presidential inauguration in Washington, D.C., U.S., on Wednesday, Jan. 20, 2021. Biden will propose a broad immigration overhaul on his first day as president, including a shortened pathway to U.S. citizenship for undocumented migrants – a complete reversal from Donald Trump’s immigration restrictions and crackdowns, but one that faces major roadblocks in Congress. Photographer: Win McNamee/Getty Images/Bloomberg Photo: Win McNamee/Bloomberg

And, brilliantly, she snuck in the title phrase of one of her songs that’s never seemed more appropriate: “Let’s get loud!”

Garth Brooks was relatively low-key in comparison with his acappella “Amazing Grace.” (What, no “Friends in Low Places?”) But like the others, the smile never left his face.