READ HOW WAYNE NEWTON LOST ALL HIS MONEY 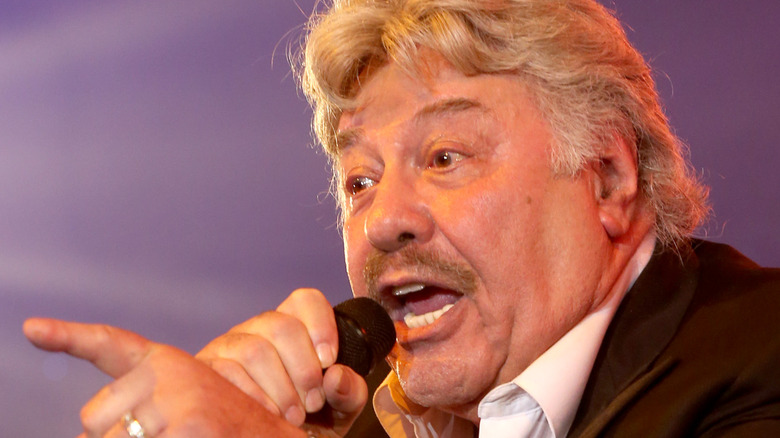 American entertainer Wayne Newton has been entertaining people since a young age — Biography reports that he started performing professionally by age 6. In the 1960s, the musician began a singing career and also played the banjo, piano, and guitar. His top hits included “Danke Schoen,” “Red Roses for a Blue Lady,” and “Daddy Don’t You Walk So Fast.” But although Newton is revered as a talented musician and one of Las Vegas’ longest-performing musical acts, he has had a long history of money trouble. From lawsuits to property disputes to allegations of animal neglect, Newton has lost millions of dollars over the years.

As Biography reports, part of Newton’s money problems began in 1980, when NBC News reported that the singer was actually a member of organized crime. They reported that he was affiliated with criminal activities linked to the Gambino family and was potentially funding criminal operations through a casino and hotel that he co-owned. The New York Times reports that Newton sued NBC for libel, and in 1986, he won over $19 million dollars in the case. Despite his big win, the sum was reduced to about $5 million and was overturned entirely in 1990 after an appeals court found insufficient evidence to establish that NBC had purposely lied. And his problems didn’t stop there.Per Biography, Wayne Newton declared bankruptcy in 1992. Not only was he out of cash, but he was also $20 million in debt, an amount that included a $341,000 lien to the IRS for unpaid taxes (via the Las Vegas Review-Journal).In 1997, Newton embarked on a new project, per the Las Vegas Sun. Newton and entertainer Tony Orlando opened The Talk of the T.O.W.N. together, which had 2,100 seats. But problems arose when shows were only pulling in between about 360 to 900 people per show, and this simply wasn’t enough to pay off the building’s $2 million lease. Then, Tony Orlando’s son discovered recording devices in a shared private room. Newton claimed he was just recording the show, and the audio was so poor that it was basically useless, but the damage had clearly been done. Newton said of Orlando (per the Las Vegas Sun), “​​I decided that I have never given up a friendship over money, but he did.”

Per the theatre’s website, the duo stopped performing together in 1998, and by 1999, Newton renamed the location the “Wayne Newton Theatre.”In 2000, per the Las Vegas Review-Journal, the IRS claimed that Wayne Newton didn’t report the sale of a $200,000 Arabian horse. The IRS said that Newton’s wife Katherine failed to report income totaling almost $400,000 from 1999 and over $500,000 from 2000, which she made through Newton’s businesses. Wayne Newton also reportedly overstated the wages for his employees and made other errors, leading to thousands of dollars in fines, alongside the hundreds of thousands he already owed. One of Newton’s lawyers countered the IRS claims, saying (per the  Las Vegas Review-Journal), “We believe the IRS owes him money.”Wayne Newton embarked on a new project in 2001: turning Casa de Shenandoah, his main residence, into a “Graceland” type of tourist site (via ABC News). He partnered with a company called CSD, which planned to turn his 40-acre property into a museum, car wash, and dinner-theater venue dedicated to Newton fans. CSD invested $50 million into the project and paid Newton $19.5 million.As Business Insider reports, Wayne Newton was sued by the IRS in 2005 after he failed to pay $1.8 million on a house he had sold. Despite the infusion of cash from his CSD deal, Newton was still struggling to keep up with his lavish lifestyle. In 2007, Newton reportedly abandoned a jet at Oakland International Airport — because, according to employees, the jet was rotting and too expensive to repair (via TMZ). He waited three years to have the plane disassembled and shipped to his Las Vegas home. Then, in a bizarre twist, he reassembled it in his backyard, where it was visible from the street.In 2009, Newton was sued yet again for another surprising reason — unpaid bills for over 4,000 bales of hay for his beloved horses, totaling more than $30,000 (per the Las Vegas Sun). He was also hit with a $36,999 bill for his unpaid Cadillac lease.The Las Vegas Sun reports that Wayne Newton had another financially difficult year in 2010. He was sued by a former friend, O. Bruton Smith, who had loaned him $3.35 million — which Newton failed to repay in time. To pay back the loan, Smith attempted to foreclose Newton’s property, Casa de Shenandoah. Newton was also forced to pay a $500,000 debt to his former pilot in 2010 (via TMZ).By 2012, Newton was sued over the sale of his property to CSD (via ABC News). After 11 years and $50 million, Newton and his family hadn’t left the property or turned over any of his personal items for CSD to display on the future museum site. There were lots of outlandish aspects to this lawsuit, too (per ABC News): Newton reportedly left “hundreds of tons of horse manure” in 6-foot piles around the estate, and his horse stables were allegedly full of urine that was “so potent that it made breathing unbearable.”

‘I WILL NEVER BACK DOWN FROM A FIGHT’
Waynes Newton’s other animals, like penguins and wallabies, were also poorly cared for and surrounded by filth, reports ABC News. CSD workers claimed that Newton would not control his violent dogs, resulting in the workers getting bitten and scrambling onto car rooftops and into trees to avoid getting attacked. And other CSD workers filed sexual harassment claims against Newton, saying he gave them “wet, sloppy, and disgusting” kisses (per ABC News). The lawsuit claimed that Newton took $19.5 million without ever planning to leave Shenandoah.The same year, a bankruptcy judge ordered that Casa de Shenandoah be put up for sale, estimating it was worth about $50 million (via the Las Vegas Review-Journal). Newton said (per the Las Vegas Sun), “By the time we got to the point of leaving, I had had enough of the toll it was taking on my family. … I will never back down from a fight. … But ​​when we left Shenandoah, I was just relieved.”

If you oranyone you know has been a victim of sexual assault, help is available. Visit the Rape, Abuse & Incest National Network website or contact RAINN’s National Helpline at 1-800-656-HOPE (4673).The property went up for sale — first for $70 million in 2013, then $30 million in 2014 (via the Las Vegas Sun). In the meantime, the Newton family and their horde of animals moved to a pair of houses worth a combined $5 million. Newton connected with a CSD representative, who offered to work something out with him so he could move back to Shenandoah, and by 2015, the family had returned. Shenandoah welcomed tourists to see Newton memorabilia, animals, and the famed property.But Wayne Newton’s money woes were far from over. In 2018, Casa de Shenandoah stopped its tours in order to perform renovations (via 8 News Now). It has not reopened to the public since then. So how is famed singer Wayne Newton making a living today? Since 2020, he has partnered with the Caesars Palace casino and notably made a commercial during the COVID-19 pandemic, encouraging people to visit the casino (via iSpot.TV). 8 News Now reports that although Newton was supposed to make a return to the stage in 2021, he was stymied by a back injury.

However, in 2022, Wayne Newton is performing cabaret shows in Las Vegas, Nevada, in a show called “Wayne: Up Close & Personal” (via Ticketmaster). Mr. Las Vegas reportedly sings, shares stories, and invites the audience to ask him questions during shows. Per Biography, the musician is now 79 years old and still performing for his devoted Las Vegas fans.

READ MORE:  According To science Says People Who Talk To Themselves Are Geniuses