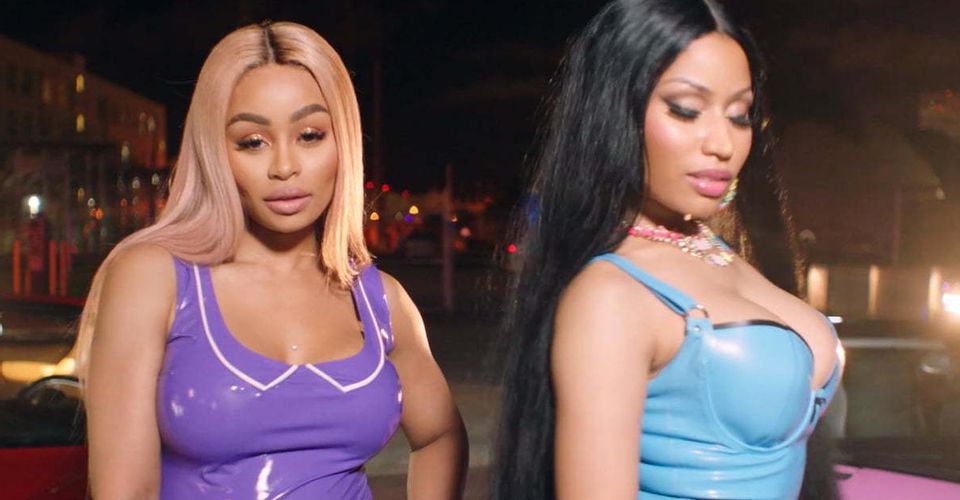 After Chyna appeared in the “Monster” video, fans started noticing the mother of two spending a lot of time with Minaj and her circle of friends.

Blac Chyna and Nicki Minaj aren’t exactly two celebrities you’d imagine being the best of friends, but surprisingly enough, these girls have been close pals for well over a decade now. While it’s unclear as to how they first met, Chyna started hanging out with Minaj shortly after being cast as her body double in the music video for Kanye West’s 2010 hit “Monster.”Since then, she’s not only appeared in multiple videos by the “Hard White” rapper but frequently posts selfies of herself with Minaj, showing that while the latter isn’t known for rubbing shoulders with fellow celebrities, she’s taken a liking to the former stripper.

How Long Have Nicki Minaj And Blac Chyna Been Friends?

Well, after Chyna appeared in the “Monster” video, fans started noticing the mother of two spending a lot of time with Minaj and her circle of friends.

We should also mention that during the time they first met, Chyna was already dating Tyga — the ex-couple share an eight-year-old son named King Cairo.

RELATED: Miley Cyrus Once Shared Why She Never Got Along With Her ‘Hannah Montana’ Co-Star Emily Osment

Tyga was already close friends with Minaj given that they were signed to the same record label at the time, Young Money / Cash Money Records. Taking this into thought, one could assume that Tyga may have very well introduced Chyna and Minaj, and they’ve been cool ever since.

Aside from the “Monster” video, the Lashed business owner has also appeared in other Minaj visuals including “Come On A Cone” and 2017’s “Rake It Up,” where the indisputable Queen of Rap gave an ode to Chyna, singing, “Brought out the pink Lamborghini just to race with Chyna / Brought the Wraith to Chyna just to race in China.”

Over the years, the pair have often shown each other love on social media, with Minaj never-ceasing a moment to like Chyna’s Instagram photos and vice versa.

Perhaps one of the reasons why these two tend to get along so well is the fact that they’re both ambitious and women who are about their money.

RELATED: Beyoncé Told To ‘Come Get Her Nephew’ After He Spills Secrets On Ex Skai Jackson

Since her rise to fame in 2010, Minaj has built an impressive $85 million empire all on her own, having sold over 100 million singles worldwide and continues to hold the title for the best-selling female rapper of all-time, with two singles having surpassed sales of over 10 million units in the U.S (“Starships” and “Super Bass”).

It’s believed that the 32-year-old is now worth a whopping $5 million, which may not be as much as Minaj, but clearly shows that this woman has come a long way from her former stripping days.

RELATED: From ‘Thank U, Next’ To ‘Dangerous Woman’: Ariana Grande’s Biggest Moments In Music History

Over the summer of 2020, Chyna launched her rap music career, having since released a string of songs with the likes of Too Short and Trippie Redd.

Her single with the latter, “Cash Only,” since its release in July 2020, has amassed close to two million views on Chyna’s official YouTube channel.

In June 2020, Chyna admitted that while she hadn’t spoken to Minaj about a possible collaboration in the near future, she would definitely be open to the idea of putting out a song with her friend — after all, having the “Moment 4 Life” hitmaker on a track would undoubtedly give Chyna the push she needs to further her career in the music industry.

In recent years, the Washington native has found herself facing multiple lawsuits from the Kardashians following her split with Rob, who at one point claimed his ex was unsuitable to take care of their daughter.

While a nasty custody battle soon commenced after their breakup, the two settled their custody battle back in 2018, when it was agreed that the Arthur George sock designer would pay Chyna $20,000 a month in child support, while she, in return, promised to drop any said domestic abuse accusations against him.

In 2019, however, Rob filed court documents claiming he could no longer cover the child support costs since he wasn’t working, and instead of putting up a fight, Chyna was okay with her former flame no longer paying any money.