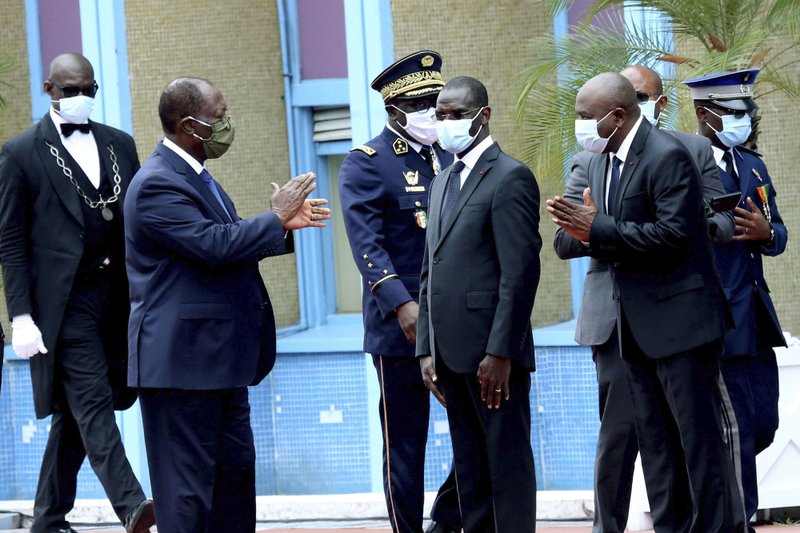 A street sweeper cleans her beat as she walks past an Ivory Coast’s Opposition candidate’s campaign posters along a street in the Cocody district, ahead of country’s legislatives election in Abifjan on Febuary 26, 2021.

Campaigning for parliamentary elections in Ivory Coast began on Friday, with the March 6 vote coming four months after a presidential election marred by violence.

The opposition boycotted the presidential poll, calling for “civil disobedience”. But it has decided to take part in the vote to elect members of a National Assembly currently dominated by the ruling party.

For the first time in a decade, the branch of the Ivorian Popular Front (FPI) led by former president Laurent Gbagbo will put forth candidates, as part of coalition called Together for Democracy and Sovereignty (EDS).

EDS has forged an alliance with the largest opposition party, the Democratic Party of Ivory Coast (PDCI), headed by former President Henri Konan Bedie, who was allied with the ruling RHDP in the last legislative elections in December 2016.

Between the PDCI and RHDP, they obtained an absolute majority with 167 out of 255 seats.

Now Bedie says he intends to win the majority with Gbagbo to “avoid the consolidation of absolute power in our country” and “to reconcile the Ivorian people”.

The election could he held in the absence of Prime Minister Hamed Bakayoko, after the 55-year-old travelled to France for a week for medical treatment.

RHDP executive director Adama Bictogo said he “would have like for him to be by our side, so that together he and I could have launched this campaign”.

The opposition’s participation in the vote comes after signs of appeasement from the government, including the conditional release of several opposition figures arrested after the presidential election of October 31, 2020.

That election was easily won by Ouattara, but the opposition contested the result, saying his bid for a third term was unconstitutional.

The violence that followed the election left 87 dead and nearly 500 injured.

The bloodshed led to all parties calling for peaceful parliamentary elections.

The campaign, which officially ends on March 4, began as Gbagbo’s supporters eagerly await his return to Ivory Coast, announced by his party for mid-March.

Gbagbo was president during a turbulent period between 2000 and 2011, when civil warfare split the country.

He refused to accept that Ouattara beat him in a 2010 presidential poll and some 3,000 people died in post-election violence before Gbagbo was arrested in April 2011.

He was transferred to the International Criminal Court in The Hague to be tried for crimes against humanity.

But Gbagbo was acquitted in January 2019, and has since lived in Brussels pending a possible appeal.

The ICC has authorised Gbagbo to leave Belgium on the condition that the country he wishes to go to agrees to receive him.

Ouattara has stated several times stated he is in favour of Gbagbo’s return.