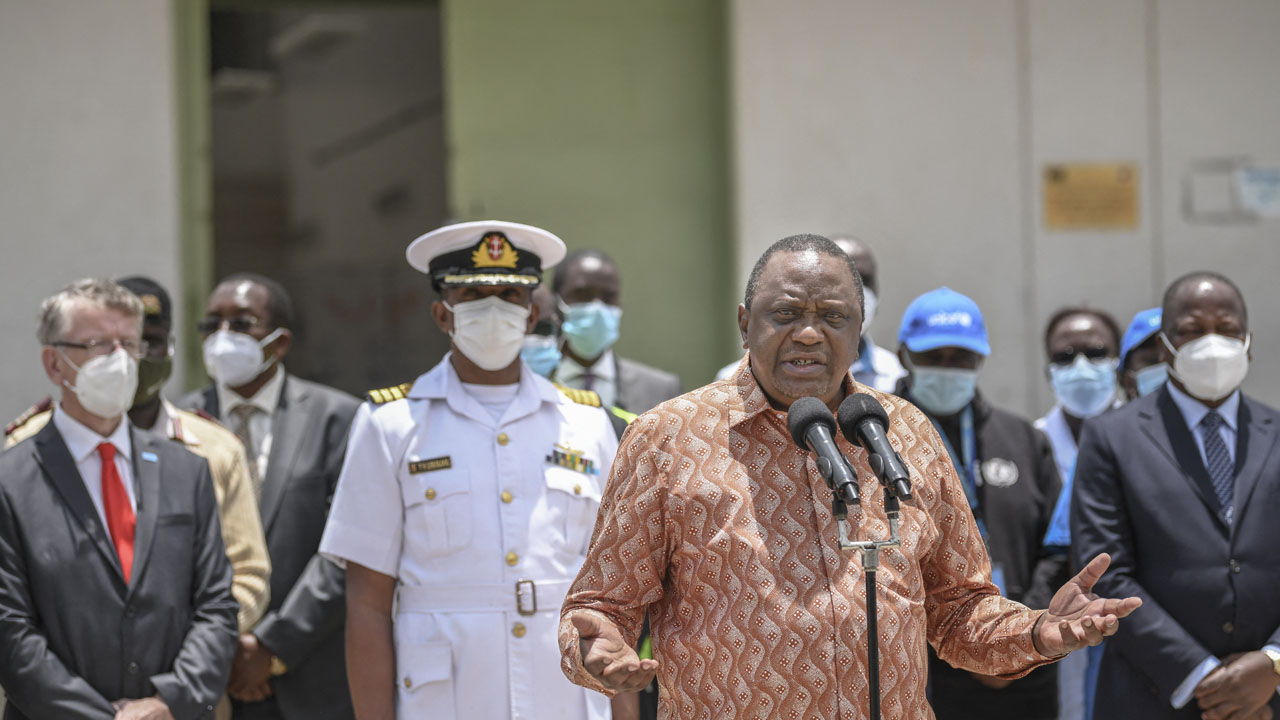 Kenya’s President Uhuru Kenyatta (C) gives an address following his tour of the Nairobi National Vaccine Depot where the country’s first batch of COVID-19 vaccines are preserved in cold storage in Nairobi on March 4, 2021. – Kenya received 1.02 million doses of the Oxford/AstraZeneca vaccine on March 3, 2021 part of the 24 million doses the country is expected to import in the next couple of months and has started dispersing the vaccines to stations around the country where healthcare workers, teachers and those with compromised immunity shall start receiving vaccinations.

Kenya’s President Uhuru Kenyatta on Friday extended an evening curfew for another 60 days — as the country approaches a year of life under night-time restrictions.

As Kenya also marked a year since it recorded its first case of Covid-19, Kenyatta warned of a third wave of infections, saying the positivity rate had risen from two percent in January, to 13 percent and “is still rising”.

Kenya this week hit its highest death toll in one day — 12 fatalities — since last year, and the more contagious variants which emerged in the UK and South Africa have both been recorded in the country.

“The nationwide curfew is hereby extended for a further containment of 60 days,” said Kenyatta, adding that a measure requiring bars and restaurants to close at 9pm would remain.

Like many countries in East Africa, Kenya took swift action against Covid-19, restricting movement, closing borders and schools and implementing a curfew on March 25, initially from 7 pm to 5 am.

After three months as measures eased this was shifted to 9 pm to 4 am, then briefly to 11 pm, and back to 10 pm where it has remained since November last year.

Schools were re-opened in January.

Kenyatta announced a fresh ban on political gatherings, which have been forbidden from the start, but mostly ignored by him and his allies who have criss-crossed the country for months drawing massive crowds and drumming up support for constitutional reforms.

Veteran opposition leader Raila Odinga — now an ally of his former rival Kenyatta — was confirmed Thursday to have tested positive after a week of such rallies at the coast.

Kenyatta noted that the measures taken had seen Kenya’s economy grow only by 0.6 percent and not the projected 6.2 percent in 2020 — causing a loss of $5 billion (4.2 billion euros) in GDP.

However he said this had saved thousands of lives and was better than the global contraction of 3.5 percent.

“We chose life over the economy.”

He also ordered the strengthening of genomic surveillance, to check on the variants circulating in the population.

Kenya has recorded almost 112,000 cases and 1,901 deaths from coronavirus. Its previous wave peaked at the end of November last year.

The country, with a population of about 47 million, has carried out only 1.3 million tests.