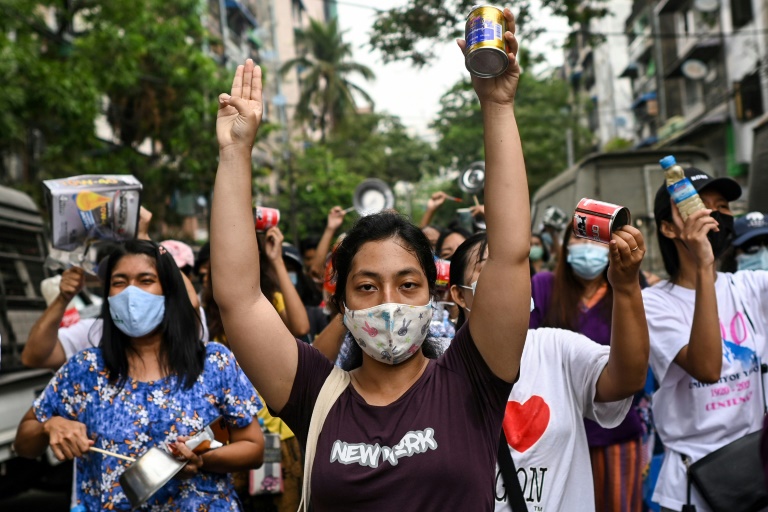 This handout from Kachinwaves taken and received on April  shows protesters taking part in a demonstration against the military coup in Hpakant in Myanmar’s Kachin state.Ten of Myanmar’s major rebel groups threw their support behind the country’s anti-coup movement Saturday, fanning fears that a broader conflict could erupt in a country long plagued by fighting between the military and the ethnic armies.

Myanmar has been in turmoil since the military ousted civilian leader Aung San Suu Kyi on February 1, triggering an uprising that the junta has sought to quell with deadly crackdowns.

According to a local monitoring group, more than 550 people have been killed in the anti-coup unrest, bloodshed that has angered some of Myanmar’s 20 or so ethnic groups and their militias, who control large areas of territory, mostly in border regions.

On Saturday, 10 of these rebel groups met virtually to discuss the situation, condemning the junta’s use of live ammunition on protesters.

“The leaders of the military council must be held accountable,” said General Yawd Serk, leader of the rebel Restoration Council of Shan State.

Last week, the junta declared a month-long ceasefire with ethnic armed groups, though exceptions might be made if “security and administrative machinery of the government… are encroached on”.

The announcement did not encompass stopping lethal force against anti-coup demonstrations.

But Yawd Serk said the ceasefire required security forces to halt “all violent actions”, including against protesters.

The 10 rebel groups that met online are signatories to a nationwide ceasefire agreement that was brokered by Suu Kyi’s government, which attempted to negotiate an end to the ethnic militias’ decades-long armed struggle for greater autonomy.

But distrust runs deep for the ethnic minorities of Myanmar, and Yawd Serk said the 10 signatories to the nationwide ceasefire would “review” the deal at their meeting.

“I would like to state that the (10 groups) firmly stand with the people who are… demanding the end of dictatorship,” he said.

Last week, a UN special envoy on Myanmar warned the Security Council of the risk of civil war and an imminent “bloodbath”.

– ‘No reason for conflict’ –
The rebel groups’ meeting comes a week after one of them, the Karen National Union (KNU), seized a military base in eastern Karen state, killing 10 army officers. The junta retaliated with airstrikes.

The KNU has been a vocal opponent of the military junta and said it is sheltering hundreds of anti-coup activists.

On Saturday, the group condemned the military’s use of “excessive force by engaging in non-stop bombing and airstrikes” from March 27 to 30, which have “caused the deaths of many people including children”.

“The airstrikes have also led to the further displacement of more than 12,000 people,” it said.

Junta spokesman Zaw Min Tun said the military has only been targeting KNU’s 5th Brigade — which led to the seizure of the military base.

“We had an airstrike on that day only,” he told AFP.

“We have signed a nationwide ceasefire agreement… If they follow the NCA, there is no reason for conflict to happen.”

Ethnic Karen local media and rights groups have reported multiple bombings and airstrikes across the state over recent days.

– Information blackout –
With the junta cutting wifi services, mobile data, and imposing a nightly internet blackout that has gone on for nearly 50 days, information flow in the country has been effectively throttled.

Arrest warrants were also issued for 40 popular actors, models, and social media influencers — most of whom are in hiding — with authorities accusing them of spreading information that could cause mutiny in the armed forces.

Thousands across the country continued to come out to protest — with at least two cities seeing security forces violently crackdown before noon.

In eastern Mon state, a man was shot in the stomach and died on his way to the hospital, while a rescue worker in central Monywa told AFP “two were shot in the head” when facing off against authorities.

Footage of the crackdown in Monywa verified by AFP shows protesters struggling to carry a young man bleeding from his head to safety as gunfire rings out in the background.

Meanwhile, state-run media said late Saturday that a police officer was found dead with his throat slit on the streets of Mandalay — an act by “dishonest people”.

CNN, which was granted access by the junta, arrived this week — correspondent Clarissa Ward was ferried around Yangon in a military convoy.

On Friday, she spoke to two sisters — Shine Ya Da Na Pyo and Nay Zar Chi Shine — who were later detained along with another relative.

Local media reported they had flashed a three-finger salute — a symbol of opposition to the junta — while speaking to Ward.

“We don’t know where they’ve been detained,” said a relative of the sisters who did not want to be named. “Our family is trying our best for their release.”

A CNN spokesperson said the company is aware of the situation.

“We are pressing the authorities for information on this, and for the safe release of any detainees,” the spokesperson said.