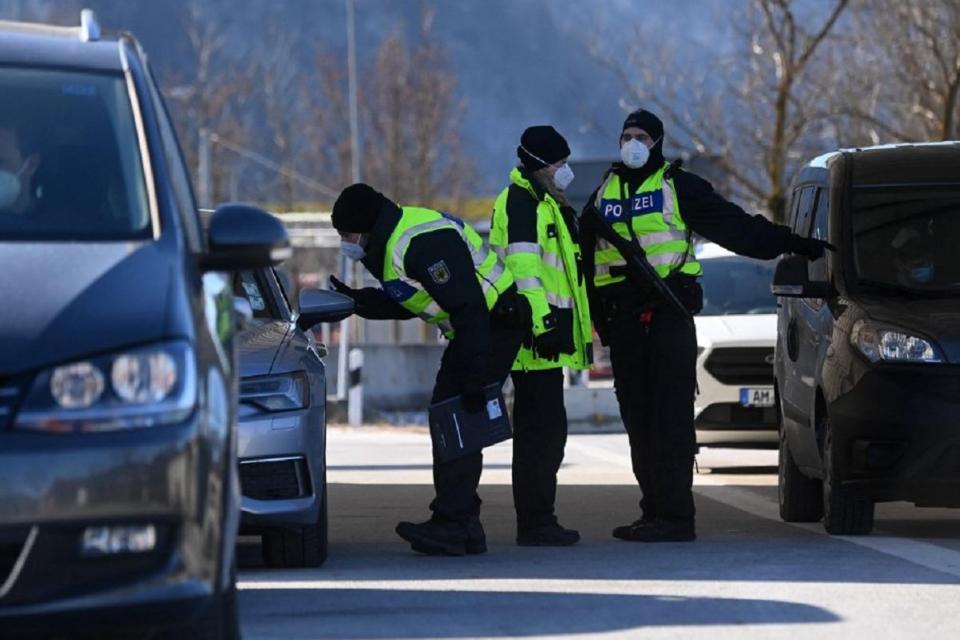 An officer of the Federal Police controls car drivers at the border crossing between Austria and Germany, near the southern German village of Kiefersfelden, amid the novel coronavirus COVID-19 pandemic, on February 14, 2021. Germany implemented more measures to keep coronavirus variants at bay, banning travel from Czech border regions and Austria’s Tyrol after a troubling surge in contagious mutations.

Germany partially closed its borders with the Czech Republic and Austria’s Tyrol on Sunday over a troubling surge in coronavirus mutations, earning a swift rebuke from the European Union.

A thousand police officers were mobilised to ensure strict border checks, a reminder of the much-criticised early days of the pandemic when EU countries hastily closed their frontiers to each other.

At the Kiefersfelden crossing in southern Bavaria, masked officers in yellow high-visibility jackets were out in sub-zero temperatures, stopping each vehicle coming from Austria.

Under the new rules, only Germans or non-German residents are allowed through.

Exceptions are made for essential workers in sectors such as health and transport, as well as for urgent humanitarian reasons, the German interior ministry has said. Everyone must be able to provide a recent negative coronavirus test.

Among those turned back was Austrian driver Irene, who said she would now have to make an hours-long detour.

“I only wanted to drive through Germany to go to Vienna,” she told AFP. “This is a catastrophe, I have a dog in the car who is 15 years old… I don’t know the way and I don’t have GPS.”

The restrictions are aimed at slowing the spread of more contagious variants that first emerged in Britain and South Africa, and have created new virus hotspots along the Czech border and in Austria’s Tyrol region.

At the German-Czech border crossing in Bad Gottleuba, a police spokesman said the checks had caused waiting times of around one hour. Traffic is expected to be heavier from Monday, he added.

By Sunday afternoon, German police had checked more than 1,700 vehicles and denied entry to more than 500.

“But the truth is that the virus cannot be stopped by closed borders,” she said, adding that vaccines and following hygiene precautions were “the only things that work”.

“I think it’s wrong to return to a Europe with closed borders like we had in March 2020,” she added.

“That’s enough now,” he told the top-selling Bild daily. The EU “has made enough mistakes” with its sluggish vaccine rollout, he said.

“We are fighting against the mutated virus,” he said. “The EU Commission should support us… instead of putting stones in our path.”

“But there are times in a pandemic when you must make these decisions for everyone’s safety and health,” he told the Sueddeutsche newspaper.

German rail company Deutsche Bahn has suspended services to and from the affected areas.

At Frankfurt airport, the country’s largest, federal police were checking passengers arriving from Vienna and Prague.

‘Reassuring’
More than two months of tough shutdowns have significantly brought down Germany’s infection numbers, but Chancellor Angela Merkel’s government recently decided to extend a partial lockdown until March 7 because of the risks posed by the variants.

In the Czech Republic, one of the hardest-hit countries in Europe, three cantons including two on the German border have been placed under lockdown due to the prevalence of the British strain.

Within Austria, anyone leaving the mountainous region of Tyrol now needs to produce a negative test following a cluster of Covid-19 cases linked to the South African variant.

Bavarian premier Markus Soeder, visiting a checkpoint with the Czech border, said Germany could not risk squandering the progress made in the battle against the pandemic.

“For everyone not living in a hotspot it’s reassuring to know that those in border regions are working hard to prevent the spread of the virus,” he said.