Here Is A Story You Don,t know About Bill Gates And His Children(Once Said He Won’t Leave An y Money To His Children) 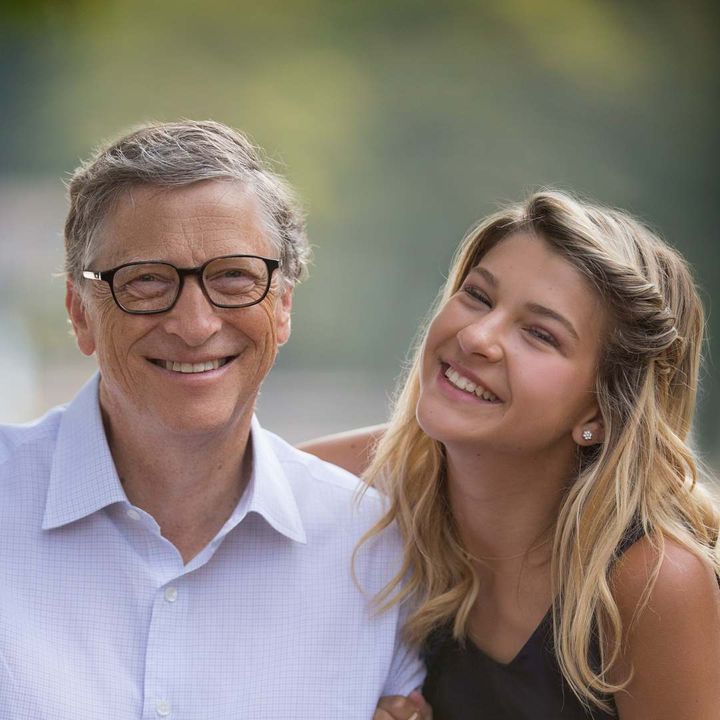 The man behind Microsoft needs no introduction but we will give him one anyway! Bill Gates revolutionized the use of personal computers in the ’80s and ’90s, gaining global fame and a truly unimaginable level of wealth.

But behind the charitable persona is a man who wears many hats. From a father to a CEO to a husband, Bill excels at it all. Though like most people Gates also seems to have a few skeletons hiding in the closet, the biggest one being Apple Inc! 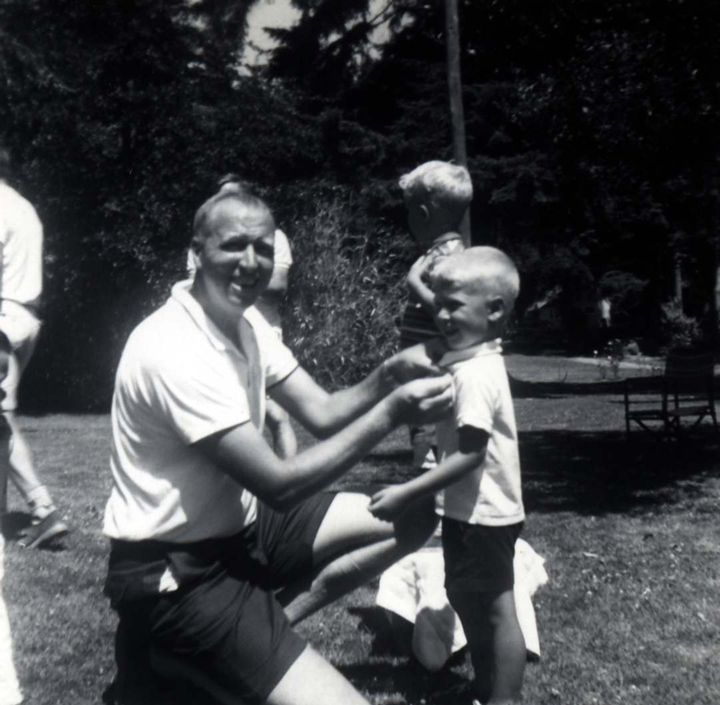 Both of his parents had successful careers and were keen for their young son to grow up and achieve his dreams. Little did they know that his dreams and ambitions would exceed even their wildest imaginations, and change all of our lives forever.

Both Gates’ parents were successful in their own fields. His mother, Mary Maxwell, was a businesswoman and bank executive. She served on the University of Washington Board of Regents from 1975 to 1993. Gates’ father, William H. Gates Sr., was an attorney. 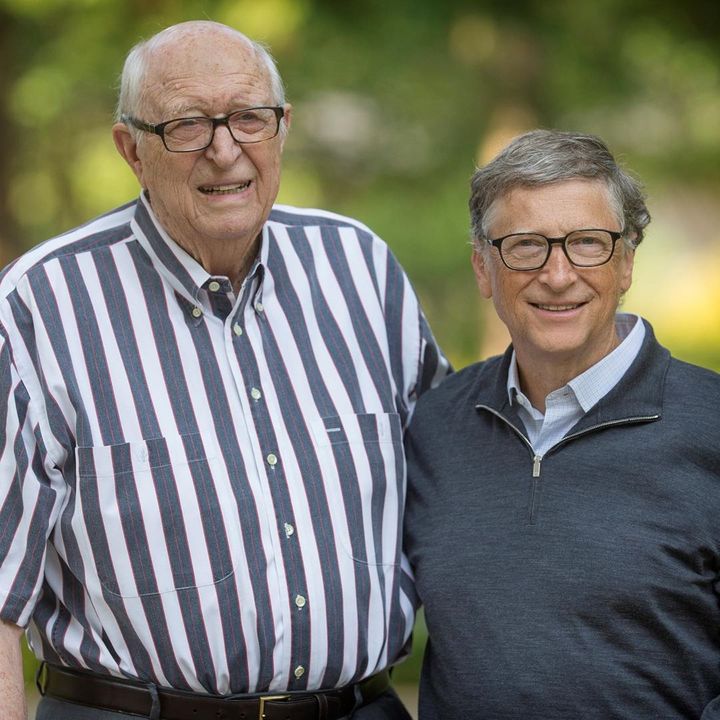 Gates Sr. had high hopes for his only son and was keen for him to follow in his footsteps and become a successful lawyer. The young Gates looked up to his father and wanted to make him proud—but his life would end up taking a different path.

From an early age, it was clear that the young Gates had a natural affinity for computers. He loved playing around with technology, always looking for new ways to create and innovate. Astonishing his parents and teachers, Gates wrote his first software program at the tender age of 13. 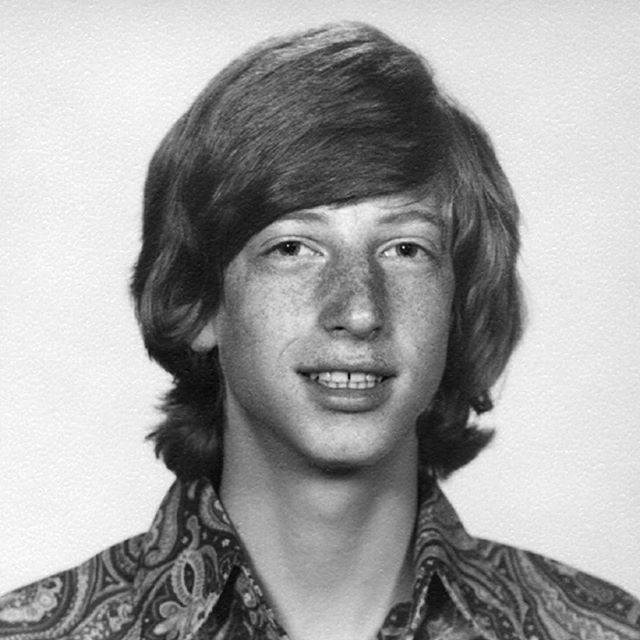 In high school, Gates was also part of a group that digitized the school payroll system. It also developed a program called Traf-O-Data, a system for counting traffic. This system was sold to local governments—pretty impressive for a high school project!

One funny anecdote from Gates’ earlier career as a young programmer while in high school, was he wrote computer code for a program that scheduled classes for all the students. 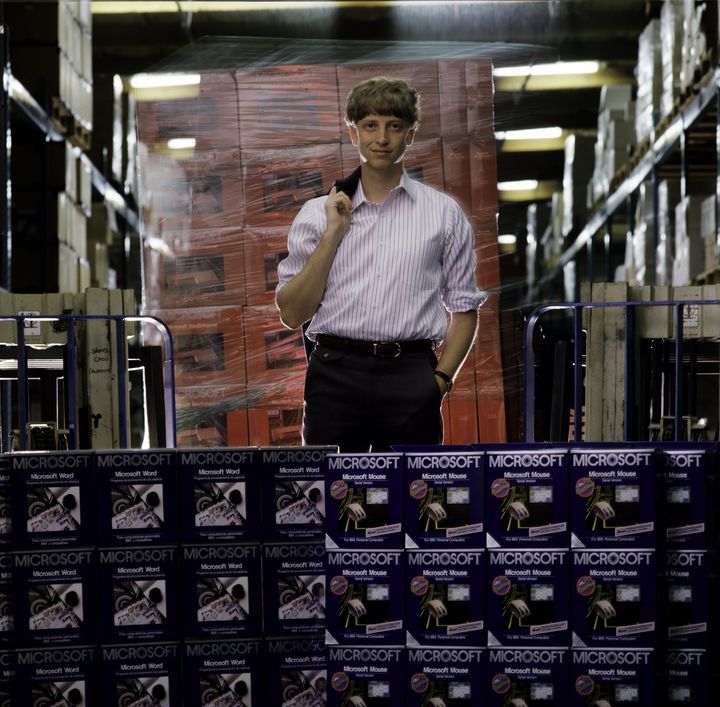 The young Gates used this to his full advantage. As a teenager, he was not known for being great at talking to girls—but he rigged up the scheduling program so that he was placed in several all-girls classes. “It wasn’t that I could talk to them or anything,” Gates laughed to the BBC. “But they were there.”

Gates admits that he was a pretty rebellious kid when he was growing up, refusing to follow his parents’ rules. “I was a bit disruptive,” he said. “I started, early on, sort of questioning—were their rules logical, and always to be followed? 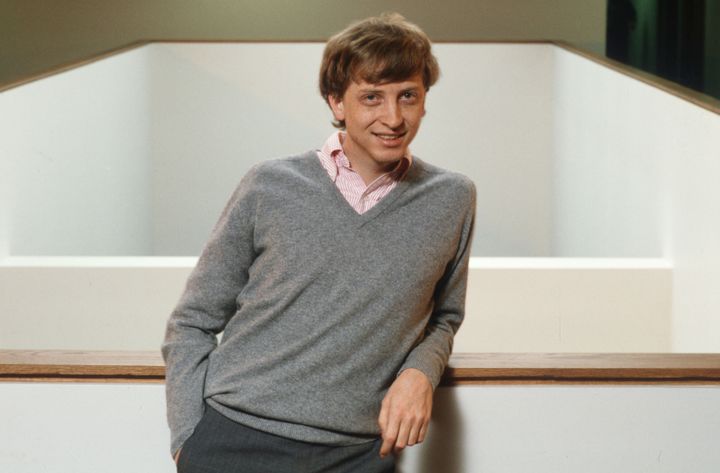 “So there was a tiny bit of tension there, as I was kind of pushing back… By the time I was 14 I got over that, which is good because then they were very supportive as I started to really engage in writing software and learning different computer things.”

Throughout Gates’ childhood and adolescence, even though his difficult years where he pushed against his parents’ authority, there was one constant he could rely on: his best friend Paul Allen. 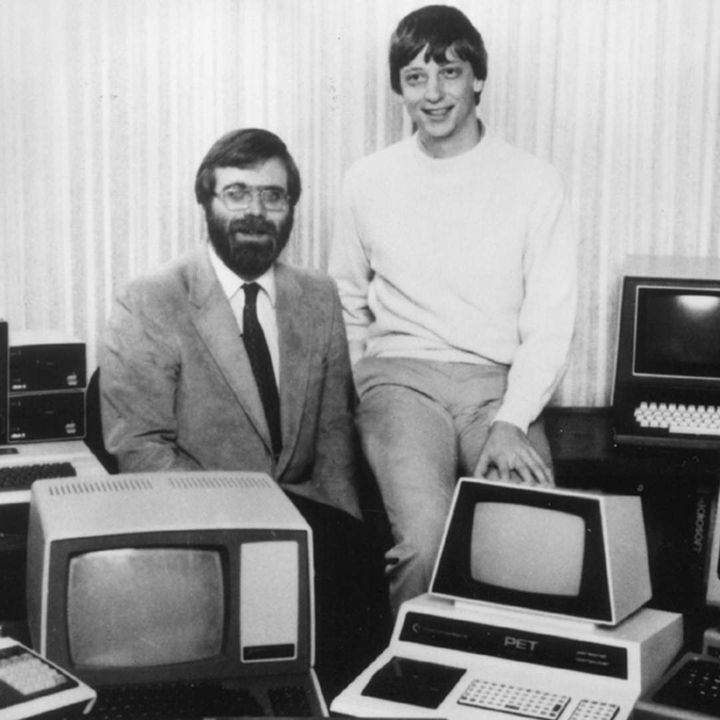 Allen was two years older than Gates, but that didn’t stop the two forming an unshakable bond. Allen even wrote about their friendship in an essay in his senior year of high school. “We fit together very well,” he wrote.

As Gates and Allen continued to experiment with computer programming, impressing everyone around them with their skill and ingenuity, they wanted to start up their own company straight out of high school. 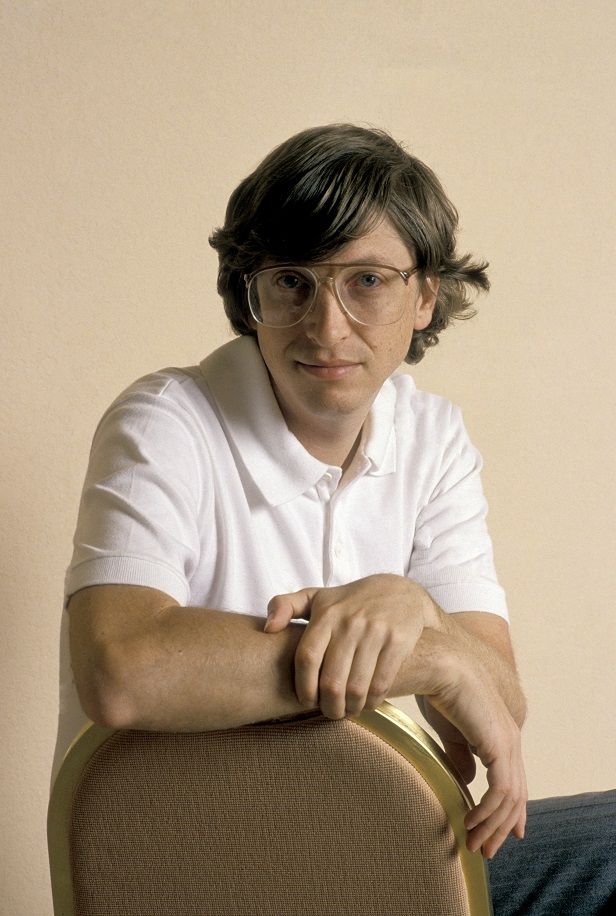 The two of them were raring to go, but Gates’ parents weren’t so keen. They didn’t want their son to drop out of high school without a diploma. They appreciated his ambition, but they encouraged him to finish high school and go to college and follow his father into a career in law.

Gates heeded his parents’ wishes and headed to Harvard University in Boston in 1973. He took a pre-law major, but he quickly shifted his focus to mathematics and computer science. 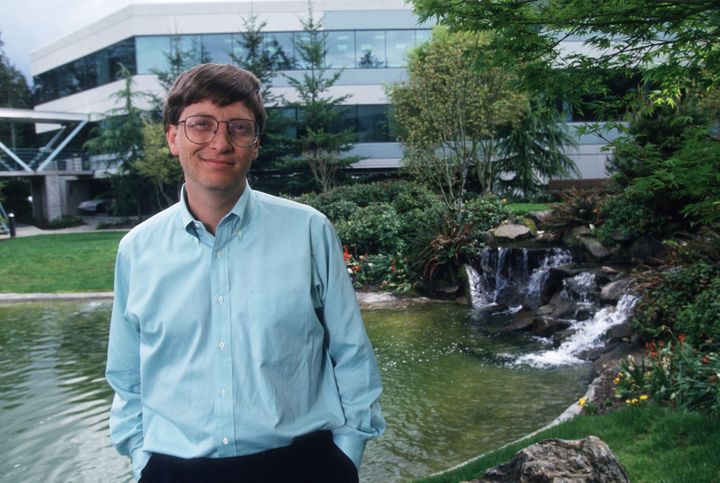 Allen was working near Boston as a programmer for Honeywell, and the two of them continued to work on their software development. In 1975, Gates called MITS, the maker of the world’s first PCs, from his dorm room. He pitched his and Allen’s software idea, and the company took him on.

Gates took time off from college to work with Allen on developing the PCs for MITS. Together, they worked on an Altair emulator running on a minicomputer, and then the BASIC interpreter. 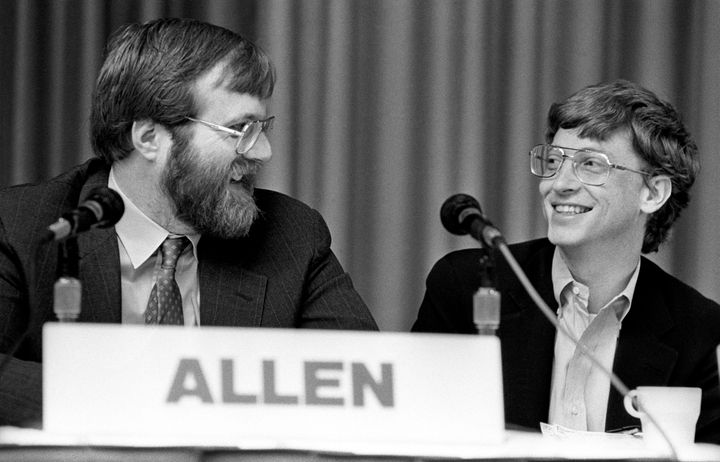 Around this time, the two of them decided to name their partnership “Micro-Soft”, a combination of “microcomputer” and “software”. The project was so successful that Gates never returned to Harvard. He wasn’t exactly your standard dropout, however—he knew that he was on the cusp of something great.

Gates and Allen then set up their own office in Albuquerque and began working together full time. They dropped the hyphen from their company name, and Gates registered “Microsoft” as a trademark. 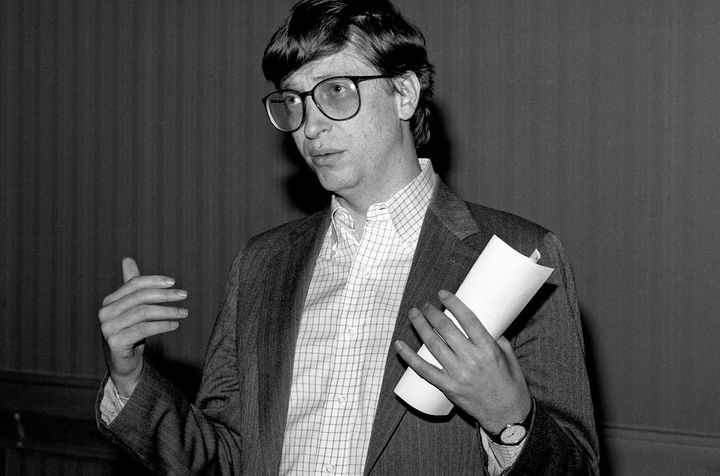 The two of them set to work developing new software, writing and rewriting varieties of computer code. They knew they were onto something big, but the rest of the computing world wasn’t exactly convinced right away.

Gates’ and Allen’s ultimate ambition was to make a personal computer that would be so wide-reaching, you would see one in every home and on every desktop. In the 70s, this what a pretty tall order, with personal computers being pretty enormous machines, basically taking up a whole room. 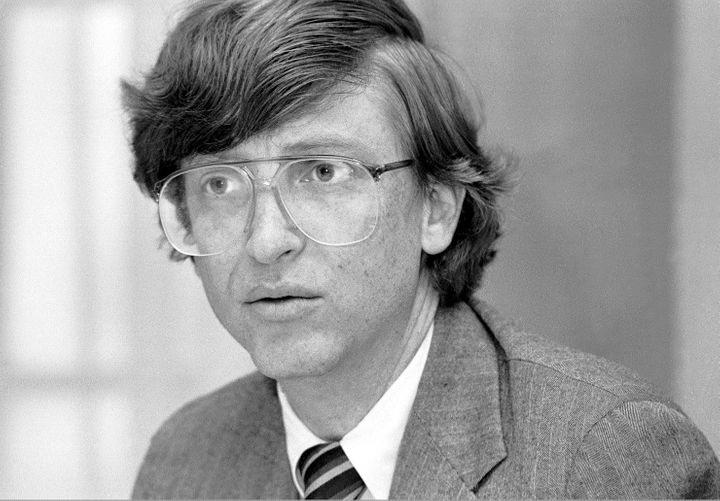 They were also incredibly expensive, and no one really could afford computers apart from large businesses and the government. People scoffed at the young developers’ dream, but they didn’t listen to the doubters—and went on to make history.

Microsoft quickly began to make a name for itself as an innovative company, with tough but focused creators at the helm. In 1979, Gates and Allen moved their headquarters from Albuquerque to Bellevue, Washington. The company quickly took off from there—in 1980, they licensed one of their operating systems, MS-DOS, to computer giant IBM. 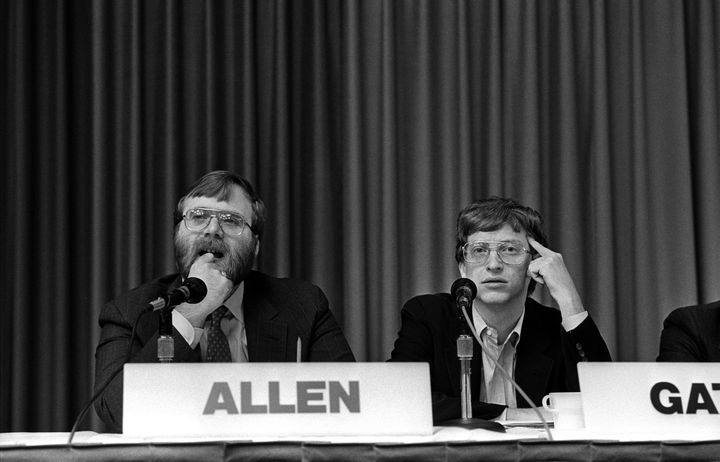 And it wasn’t just computing that Gates and Allen had a sharp sense for. They made the incredibly smart move to retain the right to license the system to other companies—meaning that they were free to continue taking over the world.

A Bite of the Apple

Around this time, Gates was also working on some shared projects with Steve Jobs, the creator of Apple. Gates compared the visual interfaces of Apple and Microsoft and came to the conclusion that Apple’s graphic display was more user-friendly. 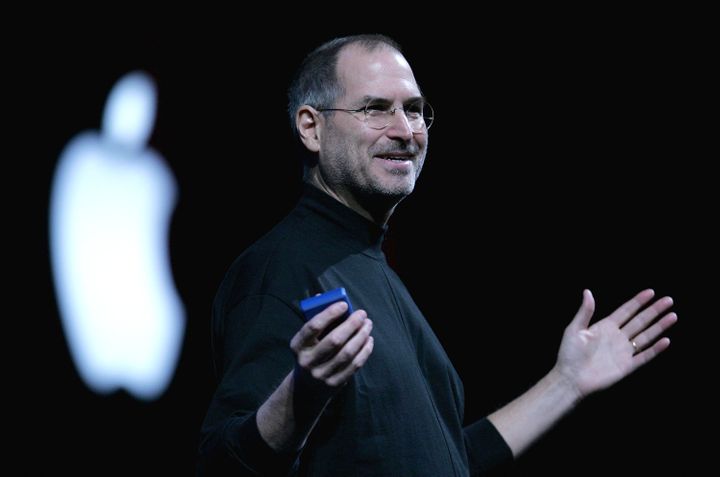 It showed text and images together and powered by mouse usage, was easier to understand than his keyboard-based MS-DOS. Inspired by Apple’s user-friendly and graphic image-based display, Gates started expanding his plans for Microsoft even more.

Gates would show an impressive skill in yet another field—advertising. He knew that users were keener to Apple’s graphic interface, but it would be a while before Microsoft would be able to offer their customers the same thing. 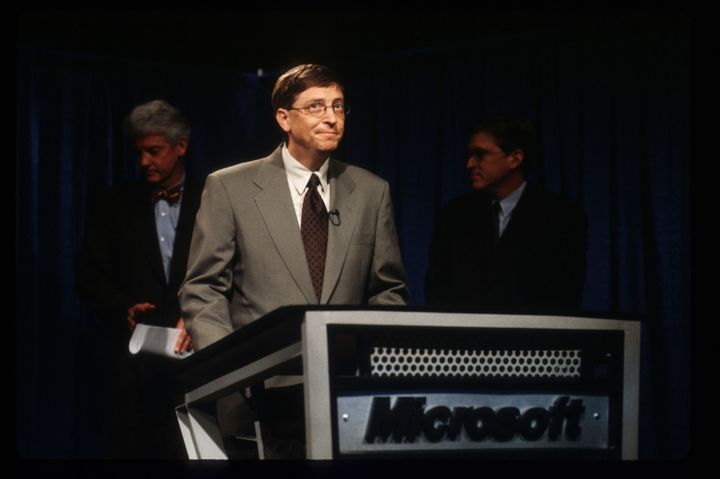 Gates launched a marketing campaign hyping up a new system from Microsoft that was currently in development. This system was called “Windows”, and he knew it could be a huge hit. There was just one problem—they weren’t developing any such system.