‘Democracy has prevailed,’ Biden preaches unity in inaugural speech as 46th US President 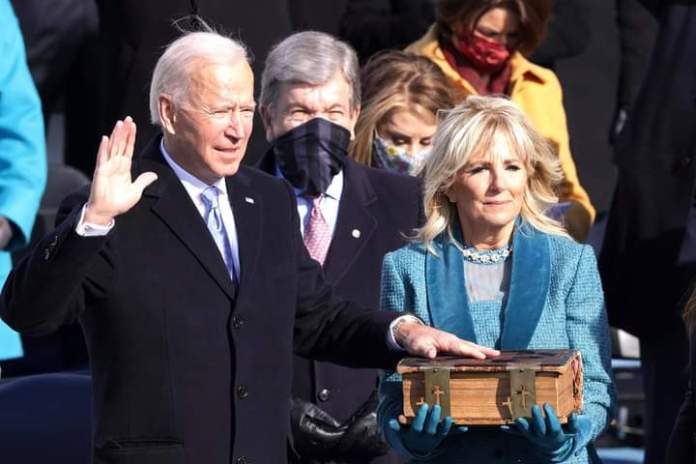 ‘Democracy has prevailed,’ Biden preaches unity in inaugural speech as 46th US President.Biden says his most crucial job is to secure the future of America with everyone’s contributions.

Joe Biden says he hopes to unite America moments after he was sworn in as the 46th president of the United States on Wednesday, January 20, 2021.

Biden’s inauguration marks the conclusion of a tumultuous political period in America that sparked to life after he beat incumbent Donald Trump in the November 2020 election.

In his inaugural speech, Biden described his victory as a victory for democracy, a reference to the numerous attempts by Trump to overturn the result of the election, attempts that were blamed for the invasion of the U.S. Capitol on January 6.

The 78-year-old said his most crucial job is to secure the future of America by overcoming many of the challenges currently facing it.

He stressed that everyone must rally together to combat extremism, lawlessness, violence, disease, joblessness, and hopelessness, and heal from the anger, resentment and hatred that has plagued the nation.

He said, “With unity we can do great things, important things. We can right wrongs, we can put people to work in good jobs, we can teach our children in safe schools.

“We can overcome the deadly virus, we can rebuild work, we can rebuild the middle class and make work secure, we can secure racial justice and we can make America once again the leading force for good in the world.”

Biden, a former Vice President, cautioned that America may be entering its ‘darkest and deadliest period’ of the COVID-19 pandemic, making it important for the nation to pull together.

He also assured American allies that the nation has rebounded from its political crisis and will once again rebuild its bridges with the world, a nod against Trump’s ‘America First’ stance.