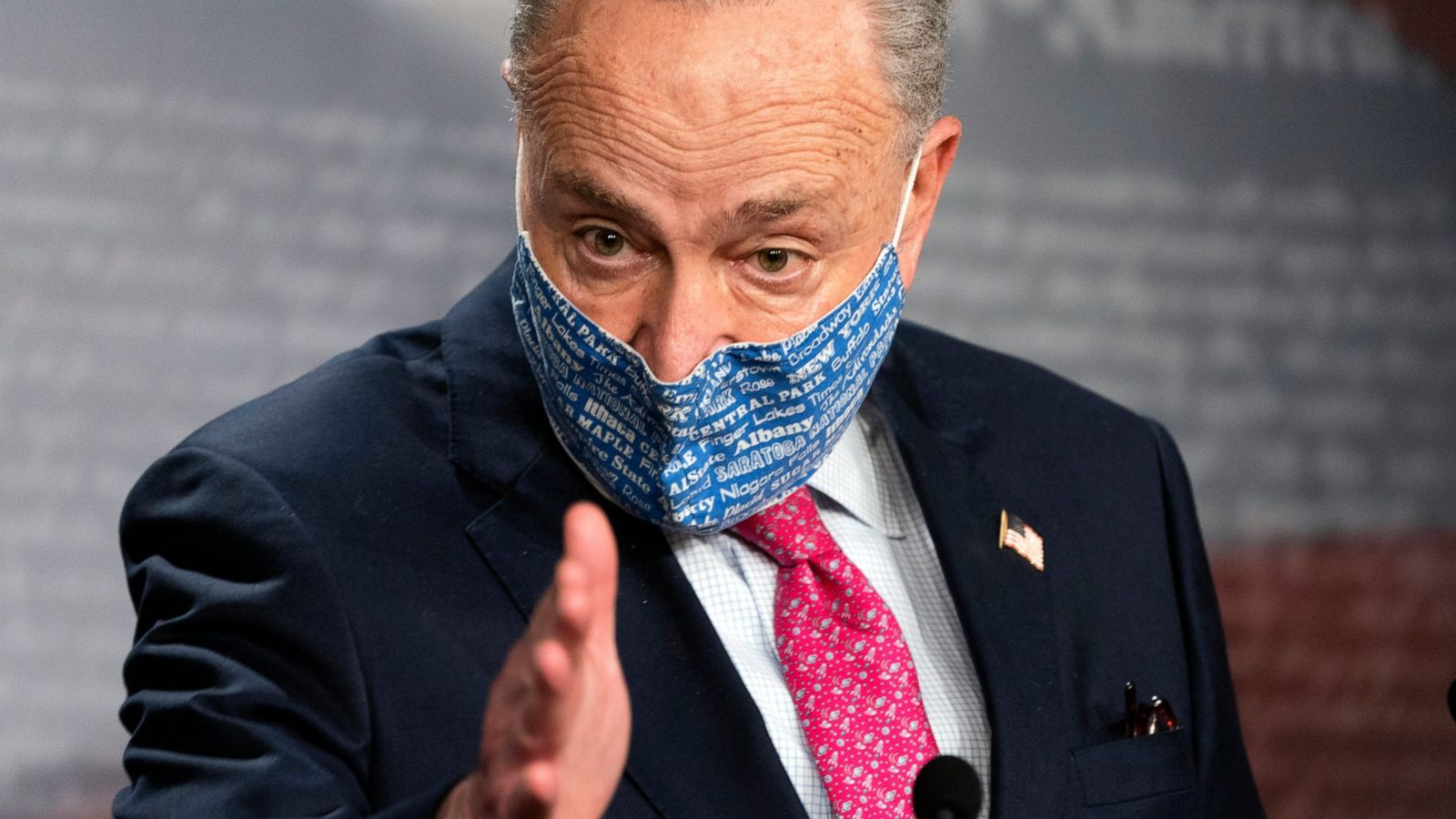 President Biden launched a lobbying effort targeting fellow Democrats on Monday to unify them behind his $1.9 trillion coronavirus relief bill as the Senate prepares to move forward on the massive legislation this week.

Democrats don’t have a vote to spare in the Senate, but several moderate-leaning senators have raised concerns about the structure of unemployment insurance benefits and Biden’s plan to send $350 billion to state and local governments, among other issues.

Biden convened a group of these Democrats on a conference call Monday afternoon, the first in a days-long outreach campaign that will also include calling into the weekly Senate Democratic lunch on Tuesday and addressing the House Democratic caucus on Wednesday evening.

Sen. Jon Tester (D-Mont.), who participated in Monday’s call, said the conversation focused on “targeting the dollars … it wasn’t talking about reducing it, just targeting” the money that was included.

Sen. Joe Manchin III (D-W.Va.) made similar comments, saying, “We’re just looking for a targeted bill; [we] want it to be very targeted, helping the people that need help the most.”

Tester said Biden was receptive but did not agree to specific changes.

Among the policies discussed at the meeting included tightening income eligibility for the $1,400 stimulus payments, according to two people who spoke on the condition of anonymity to discuss private conversations. House Democrats added new restrictions to the payments for affluent Americans but ultimately rejected proposals to prevent single Americans earning between $50,000 and $75,000 from receiving the stimulus payments.

The White House and congressional Democrats are staring down a March 14 deadline when enhanced unemployment benefits will expire unless the relief legislation is signed into law first. The House passed the bill on Saturday, allowing just two weeks to get it through the Senate, where it’s likely to undergo some changes, and then back to the House for final passage. Tester predicted that there will be “modest” changes as the bill moves through the Senate.

“The president’s focus this week and in coming weeks, until it’s passed, is on the American Rescue Plan,” White House press secretary Jen Psaki said Monday. “It’s absolutely critical Congress act, and we certainly hope they do that as quickly as possible.”

An initial procedural vote to move forward on the legislation could come as early as Wednesday in the Senate.

“I expect a hearty debate and some late nights,” Majority Leader Charles E. Schumer (D-N.Y.) said on the Senate floor Monday. “But the American people sent us here with a job to do: To help the country through this moment of extraordinary challenge. To end, through action, the greatest health crisis our country has faced in a century. And that’s just what we’re going to do.”

The legislation passed the House without a single Republican vote, and there’s no indication thus far it will command any GOP support in the Senate — making it crucial for Democrats to stay together. The Senate is split 50-50 between Democrats and Republicans, with Democrats in the majority only because Vice President Harris can break ties.

Minority Leader Mitch McConnell (R-Ky.) kept up his attacks on the legislation Monday, decrying it as a “bonanza of partisan spending they’re calling a pandemic rescue package” and lamenting, “It didn’t have to be this way.”

Monday’s call with Biden also included Sens. Mark R. Warner (D-Va.) and Angus King (I-Maine), who have proposed breaking off some of the state and local money and dedicating it to expanded broadband instead.

Other Democratic senators are pushing for changes related to the unemployment insurance in the bill, which would increase the weekly $300 payments to $400 and extend them through August. Warner wants to restore a month’s worth of unemployment benefits to the bill so they run through September, an idea also endorsed by Finance Chairman Ron Wyden (D-Ore.).

One approach would be to keep the payments at $300 a month but extend them longer. Manchin said Monday that he supports the $300 figure.

The White House is not expected to support cutting the benefit from $400 to $300, two people granted anonymity to discuss the matter said.

King has also called for tying unemployment benefits to state unemployment rates, so the value of the benefit diminishes as the local economy improves.

“If the economy is coming back more rapidly than we expect, let’s ratchet back the expenditures,” King said.

However, any concessions to moderates, particularly on state and local aid, could alienate liberal lawmakers who are already bitterly disappointed that the Senate bill will not include an increase in the minimum wage to $15 an hour. That provision was part of the House bill, but it was rejected by the Senate parliamentarian who said it was not permitted under the byzantine rules Democrats are using to push the legislation through the Senate without GOP votes.

This “budget reconciliation” process allows legislation to pass with a simple majority vote, instead of the 60 normally required, but it also prohibits provisions without a certain budgetary impact. The Senate parliamentarian determined last week that the minimum-wage increase did not pass the test.

Liberals in the House are pressing the Biden administration to try to overrule the parliamentarian, but Psaki nixed that idea Monday.

“That’s not an action we intend to take,” Psaki said. She noted that such a move would also require 50 votes in favor in the Senate, which Democrats do not have.

Following the parliamentarian’s ruling, top Senate Democrats scrambled to come up with an alternative approach that would instead penalize companies that do not pay a $15 minimum wage, but those efforts collapsed over the weekend.

Instead, Senate Democrats will move forward with a version of the relief bill that does not attempt to raise the minimum wage, according to two Democratic aides who spoke on the condition of anonymity because discussions were private.

Senate Budget Chair Bernie Sanders (I-Vt.) told reporters Monday there would be a vote during the debate over the stimulus on the $15 minimum wage. At least two Senate Democrats have expressed opposition to the measure, and only 38 Senate Democrats are currently co-sponsors of the measure. “We’ll see who is going to vote for it and who is not going to vote for it,” Sanders said. “The American people want to see that minimum wage raised.”

Psaki said that raising the minimum wage remained a priority for Biden but that there was no specific plan on how to do it.

“We don’t have a clear answer on what that looks like at this point,” she said. “It just remains a commitment and something he will use his political capital to get done.”

Even without the minimum-wage increase, Biden’s bill includes multiple liberal priorities. In addition to the state and local aid and extended unemployment insurance, it includes a new round of $1,400 stimulus checks to individuals, $130 billion for schools, an expanded child tax credit, food assistance, rental relief and tens of billions of dollars for vaccine distribution and more testing.

Republicans say most of the new spending is wholly unnecessary after Congress already spent $4 trillion on the pandemic last year and the economy is showing signs of life, despite the millions of Americans who remain unemployed.

Psaki said Biden would be singularly focused this week on ensuring that the legislation makes it through.

“We reserved time in his schedule to ensure that he can be engaged, roll up his sleeves, and be personally involved in making phone calls, having more Zoom meetings, potentially having people here to the Oval Office to [get] this across the finish line,” Psaki said. “And I expect him to be very involved personally.”