The Most Dangerous Animals In The World 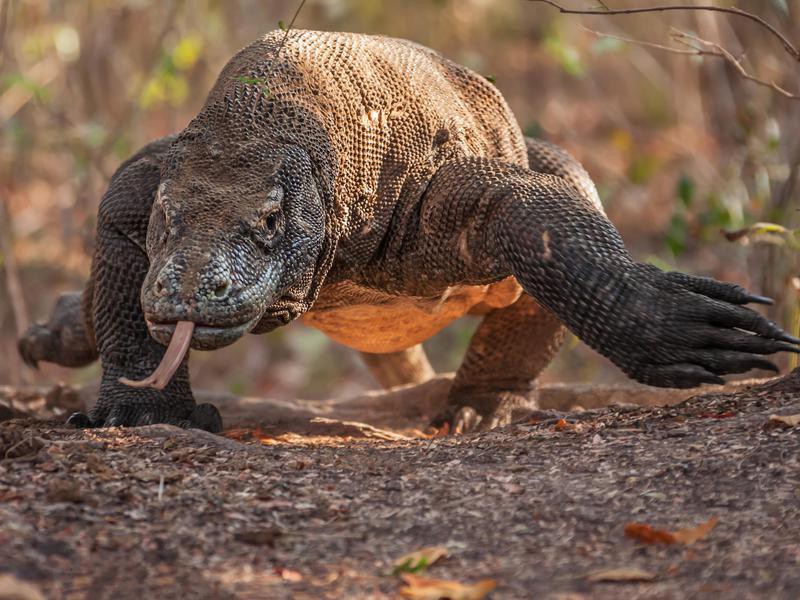 may star in the bloodiest blockbusters—and sure, spiders tend to monopolize the phobia department—but when you get down to the facts, those are merely two classes of creatures among the scariest to stalk the planet. In fact, there are many ferocious beasts, both large and small, that are downright deadly. From actively contributing to signifiant loss of human life, to packing enough venom to put unlucky travelers out of commission, here are the 13 most dangerous animals in the world—and where to find them.

Cape buffalo, which number around 900,000, are a relatively mild species when left alone, preferring to travel in massive herds to graze in early morning and late afternoon hours, or to gather around watering holes to stay hydrated. However, if an individual (or its calf) is threatened or wounded, they become the incarnation of their nickname: Black Death. Reportedly responsible for killing more hunters on the continent than any other creature, these behemoths, which can grow up to nearly six feet tall and weigh close to a ton, circle and stalk their prey before charging at speeds of up to 35 miles per hour. They’re even known to continue charging no matter where they’re injured and will not hesitate to attack moving vehicles. Suffice to say, you don’t want to mess with those horns.

Where to find them: Sub-Saharan Africa, including Kruger National Park in South Afric

Found in the warm waters in the tropics, these beautiful creatures—instantly recognizable for their highly prized brown-and-white marbled shells—can be seen in shallow depths closer to shore, near coral reefs and rock formations, and beneath sandy shoals. But do not dare to touch the 4- to 6-inch long gastropods: Their concealed, harpoon-like “teeth” contain a complex venom known as a conotoxin, making them one of the most venomous species of snails. Only a handful of people ever stung, but, quite unfortunately, there is no antivenom. The toxin stops nerve cells from communicating with one another; so the creature not only causes paralysis within moments, but, per its nickname of “cigarette snail,” affords you about enough time to smoke a stick before you die.

The poison dart is a large, diverse group of brightly colored frogs, of which only a handful of species are particularly dangerous to humans. The most deadly, the golden poison dart, inhabits the small range of rain forests along Colombia’s Pacific coast, and grows to around two inches long (roughly the size of a paper clip). Its poison, called batrachotoxin, is so potent that there’s enough in one frog to kill ten grown men, with only two micrograms—roughly the amount that would fit onto the head of a pin—needed to kill a single individual. But what makes the amphibian especially dangerous is that its poison glands are located beneath its skin, meaning a mere touch will cause trouble. Little wonder the indigenous Emberá people have laced the tips of their blow darts used for hunting with the frog’s toxin for centuries. Sadly, deforestation has landed the frog on several endangered lists, but even if you do have a rare sighting when hiking, don’t go reaching for it.

READ MORE:  How do Suicidal Thoughts In Children?

Often found floating (or slowly moving at speeds close to five miles per hour) in Indo-Pacific waters, these transparent, nearly invisible invertebrates are considered by the National Oceanic and Atmospheric Administration as the most venomous marine animal in the world. Their namesake cubic frames contain up to 15 tentacles at the corners, with each growing as much as 10 feet long, all lined with thousands of stinging cells—known as nematocysts—that contain toxins that simultaneously attack the heart, nervous system, and skin cells. While antivenoms do exist, the venom is so potent and overwhelming that many human victims, of the hundreds of reported fatal encounters each year, have been known to go into shock and drown or die of heart failure before reaching shore. Even if you are lucky enough to make it to the hospital and receive the antidote, survivors can sometimes experience considerable pain for weeks afterward, and bear nasty scars from the creature’s tentacles

The Destination You Should Visit Next, Based on Your Zodiac Sign

While plenty of snake species pack enough venom to easily bring down a human, not all of them take the multifaceted approach of the Indian saw-scaled viper, which is why they are one of the top contributors to snakebite cases. Sometimes called the little Indian viper or simply the saw-scaled viper, these reptiles live in some of the most populated regions of the range they occupy, which stretches well beyond India. They remain inconspicuous by using their natural camouflage to blend into desert surrounds. Because they are typically active at night, it’s best to listen for their defensive sizzling sound; this comes from a behavior called stridulation, in which the snake forms coils and rubs its scales together. Even with a warning, saw-scaled vipers are extremely aggressive, with more than double a lethal dose into each bite. (Luckily, there is an effective antivenom.)

Pufferfish, also known as blowfish, are located in tropical seas around the globe. Though they’re the second most poisonous vertebrate on the planet (after the golden arrow dart frog), they’re arguably more dangerous as their neurotoxin (called tetrodotoxin) is found in the fish’s skin, muscle tissue, liver, kidneys, and gonads, all of which must be avoided when preparing the creature for human consumption. Indeed, while wild encounters are certainly dangerous, the risk of death from a pufferfish increases when eating it in countries like Japan, where it is considered a delicacy known as fugu and can only be prepared by trained, licensed chefs—even then, accidental deaths from ingestion occur several times each year. The tetrodotoxin is up to 1,200 times more poisonous than that of cyanide, and can cause deadening of the tongue and lips, dizziness, vomiting, arrhythmia, difficulty breathing, muscle paralysis, and, if left untreated, death.

The most venomous fish known to humans is an easy one to miss—which is exactly what it wants. Stonefish, after all, are named for their visual similarity to rocks, sitting perfectly still and blending right into the seabed where an unsuspecting foot can easily step down on their dorsal fins, primed and ready with potent neurotoxins. The unluckiest clodhoppers will step hard, applying more pressure and increasing the amount of venom that gets injected; they may also trigger the stonefish’s secondary defense mechanism known as a lachrymal saber, which has been likened to a switchblade of the face. Fatality from stonefish venom can occur within an hour, so it’s recommended to seek antivenom immediately, applying water heated to over 113 °F (45 °C) in the meantime to denature the venom. Most importantly, watch where you step.

Florida’s alligators may be scary, but they have nothing on their cousin, the fearsome crocodile, which is more short-tempered, easily provoked, and aggressive toward anything that crosses its path. Of all the species in the world, the largest—and most dangerous—is the saltwater crocodile. These ferocious killers can grow up to 23 feet in length, weigh more than a ton, and are known to kill hundreds each year, with crocodiles as a whole responsible for more human fatalities annually than sharks. Saltwater crocodiles are especially dangerous as they’re excellent swimmers in both salt and freshwater (yes, their name is confusing), and can strike quickly with a bite delivering 3,700 pounds per square inch (psi) of pressure, rivaling that of the T. Rex. If that’s not enough to scare you, put it in perspective: Humans chomp into a well-done steak at around 200 psi, a mere five percent of the strength of a saltie’s jaw.

Often regarded as the world’s most dangerous fly, the tsetse fly—a small speck of insect that measures between 8 to 17 mm, or about the same size as the average house fly—is commonly found in Sub-Saharan Africa, especially throughout countries in the center of the continent. While the flies themselves are nasty bloodsucking bugs that usually feed during the peak warm hours, their true terror lies in the protozoan parasites they spread known as Trypanosomes. These microscopic pathogens are the causative agent of African Sleeping Sickness, a disease marked by neurological and meningoencephalitic symptoms including behavioral changes, poor coordination, as well as the disturbances in sleeping cycles that give the illness its name. If untreated, the condition can be fatal. While there are no vaccines or medications available to prevent infection, methods of protection include wearing neutral-colored clothing (the tsetse fly is attracted to bright and dark colors, especially blue), avoiding bushes during the day, and using permethrin-treated gear in more remote areas.

READ MORE:  Why You Most Be Contingency Plan If You Want To Succeed

Clocking in at just three millimeters at their smallest, the common mosquito, even tinier than the tsetse fly, ranks as the second most dangerous. Our reasoning: the sheer number of deaths each year, caused by various pathogens that several species of mosquitos (of the more than 3,000 in the world) carry to humans. The irritating insects—primarily those from the genera Aedes, Anopheles, and Culex—are the primary vectors of diseases like malaria, Chikungunya, encephalitis, elephantiasis, yellow fever, dengue fever, West Nile virus, and the Zika virus, which collectively afflict an estimated 700 million and kill roughly 725,000 people each year. As the World Health Organization notes, more than half of the human population is currently at risk from mosquito-borne diseases. Given that the pests are attracted to our body temperatures and the CO2 we exhale, our best tools to prevent infection lie in the usage of insect repellents high in active ingredients like DEET and picaridin.

Surprised? After all, we’re animals too, and since we’ve been killing each other for 10,000 years, with the total deaths from war alone estimated at between 150 million and 1 billion (and that was a decade ago), it’s a no-brainer that we top the list. Though human beings are said to be living in the most peaceful period now than at any other time in our history, we still assault each other with incredibly high rates of senseless brutality, from gun violence to terrorist attacks around the globe. We’re dangerous to other animals, too—think global warming, the destruction of forests and coral reefs, and overtourism. Given the threat we pose to countless other creatures—and the fact that we often act irrationally and have the capacity to annihilate our entire planet with a host of horrifying weapons like nuclear devices and genetically-modified superbugs—we are squarely atop the list as the most dangerous animal in the world.